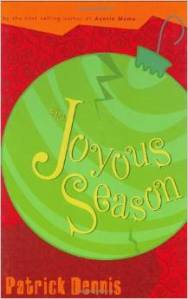 Kerry, the young boy who narrates the original upper-class family “reality show” novel, is my first pick in this new series on fictional characters I’d like to meet. Kerry and little sister Missy, along with housekeeper-cum-nanny Lulu and faithful Dachshund Maxl, navigate the hilarious year following the havoc wrecked on their parents’ marriage by the extended family. Kerry’s take on life makes him both endearing and canny. He is insecure, but does his best to look after Missy. While mature for his age, Kerry still needs and seeks the reassurance of his parents, if not of that of the psychologist he is made to see. He blunders into his idiot uncle’s secrets, but retains his innocence on matters of the flesh. In short, he is a boy every mother can love. If you’ve never read Patrick Dennis be prepared to laugh. Best known for the equally marvelous Auntie Mame, Dennis’ characters have depth rarely found in comic novels. While some social mores in this book show their age, the story itself is timeless. I read this one every Christmas and so, with stores already Decking the Halls and having “Christmas in July” sales, I choose Kerry to start my new series.

The Joyous Season by Patrick Dennis.