The Best of July

Wow! Some great books this month. It was very hard to decide on a “best of” so I gave up and declared a tie. Two “Not to Be Missed” books. (There’s that pesky “two” thing again…..)

If Dollbaby is Laura Lane McNeal’s “debut” I can’t wait to follow the upward trajectory of her writing! Superb characters and story, told in an engaging manner. For once a novel that lives up to its hype–I saw that “If you liked Saving CeCe Honeycutt and The Help, you’ll love this” and it was so true. Not to be missed. Dollbaby by Laura Lane McNeal.

An excellent book, so well told that I did not want it to end. I liked that the choices were for morality, kindness and decency. I liked that selfishness and self-centeredness were shown for the false Gods they are. “Children deserve care.” Home. Family. Mothering as a verb, mother the noun, mother the concept. I liked that this was a “functional dysfunctional family”–i.e. that they DID care about each other. Some parts of this book were like an excellent therapy session. Others hit so close to home I nearly cried. Not to be missed. I listened to the audio. Children’s Crusade by Ann Packer.

The two in prison 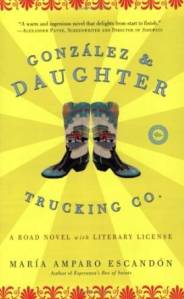 I’m told the show, Orange is the New Black, is all sex. Thankfully there isn’t any in the book–it is mentioned but that’s it. The story of author Piper Kerman’s  near-intentional self-destruction (can there be unintentional self-destruction?) highlights a problem among the prison population—risk-taking as a thrill, a high. I’m glad she grew up, if a little too late. She highlights a number of other very real problems faced by the prison population—lack of access to anything meaningful to do, too few seats in training programs, too little constructive rehabilitation. And that’s just the problems experienced while in prison. Well worth reading. Orange is the New Black by Piper Kerman.

You’ve heard of “home schooling?” Well, Libertad was “truck schooled” by her college-professor-turned-truck-driver-Dad. Along with learning to drive a big rig, Libertad learned to love literature, to hide in it, to find her nonexistent home in it. Then a change occurred in her life and she landed in a Mexican women’s prison where money equals privilege. She starts a “library club” to spin her life story and we are invited along for the ride. And what a road trip it is! No matter the book she chooses from the prison’s scant book collection her story pours forth like the nightly soap operas. Even the warden wants to listen. A great story of family, self discovery, rebirth and so much more. Gonzales and Daughter Trucking Company: A Road Novel With Literary License by Maria Amparo Escandon.

I’ve always been drawn to the stories of the World War II “war brides.” This month I devoured Ship of Brides by JoJo Moyers—a novel she wrote before Me Before You fame hit. The layers of this story were amazing. Not just the tale of how each bride came to be on the ship, but much more than that—how she became who she “is” on that ship. The story is there too of the ship’s Captain, of a Marine and of others. I listened to this as an audio book and found myself dawdling on the drive home to listen to a little more and then another little bit more. Ship of Brides by JoJo Moyes

I’m doing my best to follow Mark Zuckerberg’s Year of Books. While a few are “beyond me” the business ones have caught my eye. I read two this month and as they reference each other it was helpful to have access to both. Creativity, Inc. discusses how Pixar came to be the great creative force it is today in the world of animation. The culture of trust, of honesty and of true criticism—and the corresponding freedom to ignore that criticism, are the hallmarks of this great company.

In the second book, Beyond Measure: The Big Impact of Small Changes, the small changes discussed led to great creativity and excellent problem solving. Overwork is not the answer, but neither is being a slacker. Multitasking does not work. If you’ve ever hand an office-bound job you know these things to be true, but it is great to see them in print. “No one ever had a great idea at a desk.” True. True. True, though I might add “or in a meeting….” Those ubiquitous work “silos” that populate our corporate acreage, the fiefdoms of corner offices and private conference rooms and all the trappings of power kill creativity. Again, no surprise if you work in such an environment. Why? One executive put it best: “I’ve never learned anything from someone who agrees with me.” Get up. Get out. Go for a walk. Bring in the janitor, the receptionist—anyone who is part of your company. Get a fresh perspective. Kill power. Why? Folks in power, it turns out from brain imagine, are less responsive to others. Imagine that. Give power away and the process works. Both of these are excellent and well worth anyone who works making time to read either or both. 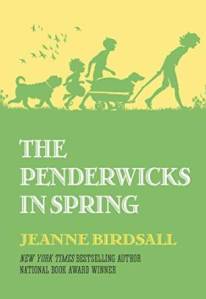 I love children’s chapter books. Before there was the land of vampires and skeezy romances that are the bulk of today’s so-called “Young Adult” literature, there were only books and children’s books. One new children’s series I’m in love with is the Penderwicks by Jeanne Birdsall. Book four of this projected five-book series is the latest installment and it does not disappoint. While I noted many reviewers commented on the “darker” tone of this volume, I still found it as wonderful as the others. The sisters are growing up—oh not in a sex, drugs and rock ’n’ roll way—it is still the Penderwicks after all! But in normal ways. No one wears butterfly wings anymore. There are losses and new blessings, but thru it all the Penderwick family honor is upheld, even if the M.O.P.S. happen far less regularly these days. If you love Elizabeth Enright’s Melendy Quartet, you will love it’s modern cousin, the Penderwicks.

My “other” children’s book this month is one I’ve had on my list for decades—All-of-a-Kind Family. I’m not sure what took me so long for it was simply wonderful. I read another from my decades long list, this one more of a young adult book (in the traditional sense of that phrase—not really a child, but not yet an adult) 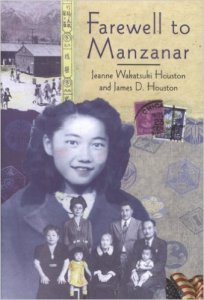 Farewell to Manzanr is a classic piece of young adult war literature (non-fiction). But when I was the right age for it at the time it was published, it was not used in the schools. So, I arrived at reading it very late. I found this one compelling and illustrative, but rather dated. The author is so deferential—where is the well-deserved anger? Where is the injustice. I know she is showing the Japanese side of her life, rather than the American, but I still thought the voice was too passive. It was among the first books on the internment of the Japanese and was written for young people at a time when that still meant preserving much of their innocence, but I found it sadly “weak.” Maybe that’s the point—that they were too weak to oppose, in any meaningful way, what the government did to them. I felt for her in so many ways—that her childhood was so bleak, both due to the environment and to the destruction of her father. Not Nazi bleak, but bleak none-the-less for they, too, were in concentration camps, albeit ones with ample, if unfamiliar food, more medical care, very poor housing and some, but very limited,  freedom. But no American citizen should be put behind barbed wire in her own country without just cause. I felt that message was under-served by this book. I wonder what today’s youth would think of such a gentle re-telling of such a troubled time. Farewell to Manzanar by Jeanne Wakatsuki Houston and James Houston.

One thought on “July Book Reviews: Two by two”