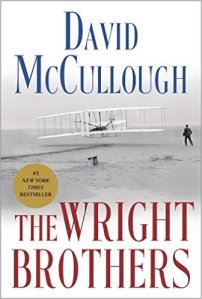 Instead of a history crush, I have an HISTORIAN crush: David McCullough not only frequently narrates American Experience, but his books are simply tremendous. Although I’ve held fast for years to Mornings on Horseback as his best book, I’ve now relegated it to second place. The Wright Brothers is magnificent. If you discard the meticulous notes pages, then not only is this book beautifully written and exquisitely written, it is also within the tyranny of the 300 page book club limit.  McCullough’s fabulous prose brings Orville and Wilbur Wright to life. You come away “knowing” the brothers so well that you mourn for them being dead. Their amazing tenacity, patience and determination make this a book that should be read in every high school in America. Today, sadly, with mandatory college degrees and over-the-top credentials-worship, academic grantsmanship, faculty unions and all the rest, the brothers would be ringing up sales in a bike shop and be denied any credibility for the science that they all but created: aeronautical engineering. (Ok, likely today they would go to college.)

It is their character that gave them the confidence to do what they did. That kind of character is not something that can be taught in a class. It is from being raised right. It’s no accident to me that they grew up in a Christian home–their father was a minister.

At the height of their success they were both in Paris. McCullough put it this way:

“Never in their lives had the three Wrights been among so many who, by all signs, had little to do but amuse themselves. Nor did they feel out of place or the least intimidated by such company. They felt that they, in their way. were quire as well-born and properly reared as anyone. Never did they stray from remaining exactly who they were, and more often than not, they found themselves most pleasantly surprised by those they were meeting.” p. 214

King Edward VII, King Alfonso XIII or the next door neighbor in Dayton, Ohio–they were gentlemen to all. They were seen to have an excellent character and admired for it. They did not belittle anyone else ever. Today, they would likely not be on social media (beyond a corporate web site and maybe things related to that alone)–that should tell you all you need to know.

The Wright Brothers by David McCullough. 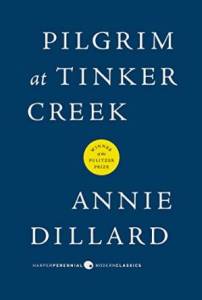 If it is rare that I read a book largely on science, then finishing two such in a month is rarer still.  This is another of the amazing books assigned in the Amblesideonline homeschool curriculum and one of the first I’ve finished from my Self-Assigned Reading from that curriculum.

Sometimes a classic becomes a classic because there’s absolutely nothing else at all to call it. Pilgrim at Tinker Creek is that book. While I admittedly skipped some of the part on internal parasites, this is among the most vivid prose ever written about the natural world–write up there with John Muir, Rachel Carson and Ernest Thompson Seton.

Read this one slowly–savor it. Don’t rush to check the “done” box. Let is flow over you, dwell on passages, write them out beautifully.  (And flinch at a few too or even gag–even the greatest can overdo it).You won’t be sorry. It’s that sort of book. You’ll never step out in your yard again without really LOOKING to see what all is really living around you.  Pilgrim at Tinker Creek by Annie Dillard 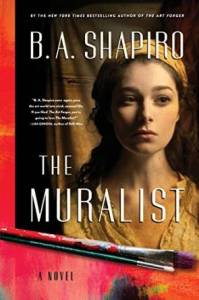 With so much greatness this month, it is sad to have to say I wasn’t enthralled with The Muralist. Her portrayal of Eleanor Roosevelt and various famous people, such as artist Jackson Pollock, was so cardboard–so lifeless, their conversation often stitled. Though the story involving Eleanor was completely believable–her sort of cause, her sort of left-wing organization, Ms Shapiro just did not breathe life into Eleanor at all. But, Eleanor did certainly a champion of helping artists with the W.P.A. The plausibility of the story is not in question.

Like it or not (and I certainly do NOT) Americans of the 1930s and 1940s had little feeling for the Jews in Germany–outside of the Jewish community itself. Most people did not come to know of the death camps until the camps were filmed being liberated. Even the Jewish community itself had divisions–those wanting to assimilate and those of Zionist stripes. Certainly there were people working tirelessly to help the Jews trapped in Nazi Germany and elsewhere in Europe. Certainly there is blood on the hands of the U.S. State Department for withholding legitimately apportioned refugee visas.

Eleanor herself had outgrown upper-class elitism and anti-semitism, but she could not do more than advocate to FDR. She certainly would never have approved an assassination attempt. I highly recommend both No Ordinary Time and Blanche Weisen Cook’s fabulous biography of Eleanor to see what all she did to improve the lives of downtrodden people. For more on the Jewish visa problem, I highly recommend 50 Children: One Ordinary American Couple’s Extraordinary Rescue Mission into the Heart of Nazi Germany–here’s a link to my review.

Leave me a comment with your list for December. I always love to hear about books friends are reading.

One thought on “What I’ve been reading: December 2015 book reviews”