Source: Getty Images via the Vogue

All of my books-to-be feature cross-generational love matches. The older man, younger woman relationship that is not just a “trophy wife.” Here in the Library of Life I also post about such couples both in film or fiction and in real life. I try to stick to “only” marriages, but occasionally make an exception for an unusually successful second marriage.

Over the weekend, one such couple married in a fabulous ceremony with royalty and other aristocrats attending. Lady Charlotte Wellesley, Daughter of the Duke and Duchess of Wellington married her beau, Alejandro Santo Domingo in Spain. Alejandro is 39, though he looks years younger,  to his bride’s mere 25 years. This, to me, is the stuff of fairy tales. It’s not like she married him for his money–her father has plenty. She is a modern woman with an Oxford degree and a career working with famed photographer Mario Testino so she could earn her own as well.  For me, the best part is this couple even looks in love!

The 25-year old noble wore an elegant, off-the-shoulder wedding gown designed by Emilia Wickstead. Her cathedral-length veil hardly concealed her ear-to-ear smile as she prepared to marry the man of her dreams.

This is no ordinary family Alejandro is marrying into. Her Great-many-times grandfather won the battle of Waterloo and gave supposedly gave the British the phrase “The battle of Waterloo was won on the playing fields of Eton.” The Iron Duke he is still called. Wellington College, another Eton-ish school, was founded as a monument to him.

Lady Charlotte’s line of descent from the British Royal Family: Queen Victoria, her grandson Kaiser Wilhelm II and his son Crown Prince Wilhelm. She is related to both the Queen and Prince Philip (not due to their marriage) due to her descent from Victoria.

But, wait there’s more! Charlotte’s mother, Princess Antonia of Prussia (to give the Duchess her title at birth) is a direct descendant of Queen Victoria’s daughter Vicky (the Princess Royal) thru Vicky’s son, Kaiser Wilhelm II [Yes, THAT Kaiser Bill]. So had World War I not gotten in the way, she’d be number 386, or something around there, in the succession to the British Throne. 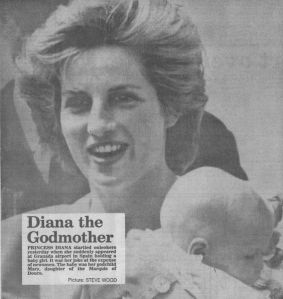 Her siblings are among the four or five Wellesleys who were/are Royal Godchildren, too. Like Princess Diana’s family, the ties to the Windsors are very strong–genetic even. Charlotte’s sister, Lady Mary, is a Goddaughter of the late Princess Diana and her brother Lord Frederick is a godson of Prince Charles.  Old news, of course, but back very early in the day, Prince Charles dated Charlotte’s aunt who famously said she didn’t need to marry him–she already had a title.

This is no ordinary family Charlotte is marrying into, either though. Not only is her new husband a billionaire (he works in finance–what else would a good Hotchkiss/Harvard grad do?), but his niece could eventually have been the Princess Consort of Monaco had her husband, Andrea Casiraghi, inherited the throne. Too bad his uncle, Prince Albert II, had kids at the last minute.

But back to the wedding. The ceremony was held in an ancient church on her father’s Spanish Estate–a gift of the Spanish nation to the Iron Duke. Her father gave about $4,000 to help with the restoration of the church in thanks.

Now for the fun part. According to the Daily Mail, the estate is where Charles and Diana hid out after his relationship with Camilla became public. It gets better. Who was at the wedding?  See below…. yep! Camilla! Aristocrats just aren’t the same as you and me.

This weekend was just one of the bashes to celebrate this wedding. The previously had an over-the-top, three-day event with the groom’s side in Colombia. Alejandro lives in New York, but his parents have their home in Colombia. The country’s president attended the wedding this weekend. No word on any New York celebration.

I wish them well.

Want to see more of the wedding? Here are links to a few articles with nice photos, including candid ones posted on Instagram at #charlejandro –including pictures of the lovely, watercolored invitations and the adorable child attendants.