I spent 1 hour and 15 minutes in the car each way to/from work, five days a week. That’s a lot of time to listen to great books! I have series I LOVE on audio and one that was ruined by the change of reader. Series are a great deal for commuters–they’re like spending time with old friends after a while. 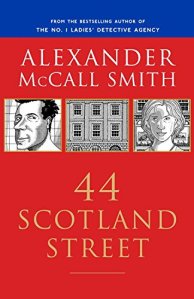 Alexander McCall Smith writes several series these days. 44 Scotland Street is the other one he writes that I love. Poor Bertie, stuck with that Mother and Olive and therapy! And his poor father, too, always losing the car. I also love Domenica and Angus and dear Cyril. Those are my favorites in this large ensemble cast which grew out of the adventures of the residents of a block of flats at 44 Scotland Street in Edinburgh.

I used to LOVE this series! It’s another one I started after I found this job. I binge-listened to Stephanie, Joe, Ranger, Lula, and Grandma Mazer and had a fabulous time as cars were blown up, Rex trotted out of his soup can, and Grandma wrecked havoc at the funeral home. But then, … BUT THEN, C. J. Critt  was replaced [maybe it was her choice? I don’t know] and I couldn’t stand listening another minute! C. J. Critt  WAS this series. The new person turned Grandma Mazer into a dim-wit and made other unforgiveable changes. So, now I have to read these. Stephanie Plum One for the Money by Janet Evanovich.

Nancy Horan makes famous people come alive! I fell passionately in love with Loving Frank–so much so that it became my Must Read recommendation that year at my old blog. Frank Lloyd Wright and Mamah Borthwick Cheney were a WOW couple. They broke society’s rules, loved, lusted, lived and did it all while he created beauty. This story has it all. While it is fiction it is based on real events in real lives. Just writing about it makes me want to listen to it all over again. Loving Frank.

Everyone was raving about this book, but when I picked it up in hardback I couldn’t get it going. I switched to the audio and it became one of my all-time favorite novels. This is later-in-life romance at it’s very best. It is modern day Britain at it’s best. An elderly widower and widow discover they have more in common than people think. One is British, the other is Pakistani, but people are people the world over as we’re told and it is true. This is a love story to be savored for the ages. Major Pettigrew’s Last Stand.

I don’t listen to podcasts on my commute–instead I enjoy these at home. Here is a link to my recent podcast post. Please click and read the short list of my faves. Podcasts I Enjoy.

Have a favorite audio? Favorite podcast? Leave me a comment with the titles or a link!

Better yet! Join in the fun of Top Ten Tuesday by posting your own list and linking it up at The Broke and The Bookish.

One thought on “Top Ten Tuesday: My favorite audios and favorite podcasts”