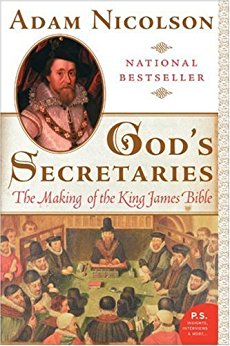 The United States is a unique country in many ways. Take for example that a it still today has many, many King James Version-only churches and believers, yet overthrew the very monarchy that ordered the book created! You read that right.

Adam Nicholson points out in his very readable history, God’s Secretaries: The Making of the King James Bible, that although the Pilgrim Fathers brought the so-called Geneva Bible with them, it is the King James Version of the Bible that their descendants revere.

But I’m getting ahead of myself. Back in the early 1600’s England and Scotland were going thru a spot of bother. The freak fringe was challenging the status quo on religion, people were getting all kinds of worldly ideas, they had a leader who loved to spend money (and who loved pretty boys). So, what better way to reign in the rabble than a common core of values to be taught to all, albeit from the pulpit of churches?

Naturally, such a document could not be whipped up overnight. Nor could it be done by just anyone. It required a COMMITTEE!! (Que the scary music! Cue the cha-ching noise!) Worse, still: It required a committee of … EXPERTS. And, so it turns out, a committee was assembled that turned out to be a committee of scholarly expert translators who turned a blind eye to both their mandate and plagiarism and That then was the creation of the beloved King James Version of the Bible–aka the Common Core of it’s day. The Bible most take to be “the way God speaks.”

While we’ve also been told over the years that this Bible was in the vernacular of it’s day–part of its mandate was to be the language of the ordinary man in the market. But it was not that or any other man of that day and it was not simple. What is simple about “Who is man that Thou art mindful of him?”  The Bishop’s Bible and The Geneva Bible were there before King James even came to the throne and they were very simple and accessible. Even more interesting is the very real plagiarism of William Tyndale’s translation of the New Testament. Much of the glory of the Gospels comes not from that august committee of Churchmen and Oxbridge Dons, but of a simple non-conformist preacher’s earnest endeavor. Then too the reviews were bad. Yep. The book reviewers panned it. Archaic. That was their word. Archaic. You can’t please critics.

Say what you will though. Whether you believe it to be God-breathed, inerrant Scripture or merely fine prose, it got something really right: It beautifully conveys The Majesty of God in His Heavens. Which makes it even odder that a bunch of lunatics who left Scooby, England for Amsterdam before coming to America on a little tub called the Mayflower preferred simplicity, lack of ritual and lack of symbols, and lack of a bloated denominational hierarchy and it’s hefty annual fees.

Instead, they steeped themselves in the Word, but did so without benefit of Bishops in miters or vicars in surplices or by kneeling or waving incense. The married in civil ceremonies because the marriage service was not from the Bible, but from the much-detested Book of Common Prayer which stood in the way of a humble believers direct communication with His God and Savior. Anyone could read and interpret the Scripture. They did not need an Archbishop’s epistles to tell them what to think, nor did they need a   silk-frocked priest to interpret it for them. And, the certainly didn’t want a bunch of bureaucrats, attorneys, lobbyists and tax collectors directing their worship. And as for the Divine Right of Kings…..

About 150 years later, their descendants also decided that Monarchs and all their trappings of difficult ex-wives, expensive homes and over-the-top wardrobes could go, and take their state-supported church with them.

This is a highly readable book, but Adam Nicolson, being English, an old Etonian and a descendant of well know 20th Century politician, courtier and writer Harold Nicholson (and wife Vita Sackville-West) does not really understand one huge point: People STILL believe in the inerrant Word of God in America. Maybe not in the United Kingdom, maybe not in the Church of England, but among the descendants of that bunch of religious hooligans from Scooby (and those they inspired or forcibly converted) true believe is alive and well.

God’s Secretaries: The Making of the King James Bible by Adam Nicolson.

I’m looking forward to another of his books, The Mighty Dead: Why Homer Matters. I never could stand the Odyssey, though my kids enjoyed it. Maybe I’ll like it after reading Nicolson’s book?