This week we’re looking at our top 5 favorite under-rated books.Being poor at math, I’ve posted 6–but only because the last 3 are a triology.

I’m starting my list with two I’ve pushed a lot on this blog. One is my Must-Read Book of 2017 and the other was a very close runner-up. Both are nonfiction and both are such amazing reads!

The Sound of a Wild Snail Eating by Elisabeth Tova Bailey

Barefoot at the Lake by Bruce Fogle 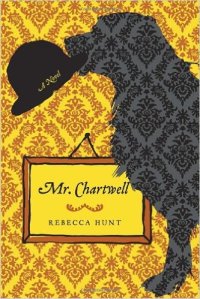 Mr. Charwell, is a delightful little book–how odd to say “delightful” about a story centered on depression! But, it IS delightful! (The book, of course, not depression!) It’s the week of Sir Winston Churchill’s long-long delayed retirement from Parliament. Now in his 89th year and only months from death, Sir Winston’s “black dog,” as he called depression, has come to life and is visiting House of Common’s library clerk, Esther who soon is called to a rendevous with destiny at Chartwell, Sir Winston’s home, as his substitute secretary. “Black Pat,” the dog who arrives at Esther’s home to rent her spare room and calling himself “Mr. Chartwell,” is the palpable presence of depression in the most literal sense. He is a huge, hairy black dog who tries to suck the life, the will, the energy out of his “clients.”

As for the fateful meeting of Esther and Sir Winston, I’ll leave that for you to read about! (This review was published on my old blog on May 6, 2011).

Frank Schaeffer’s Calvin Becker Trilogy is one of the funniest coming-of-age stories ever written. It is also regarded as heresy and sacrilegious by many, many Evangelical Christians. I couldn’t care less–it’s hilarious. It’s a not-very-nice fictionalized (barely) send-up of Frank’s rather neglectful parents, Fran and Edith, who are nearly Saints in the modern American Evangelical movement. [For the record–there IS much to admire about the Schaeffers and their daughters–and Frank, as well. I’ve read many of their books and admire much of what they wrote, but I can laugh at myself and I don’t take anyone too seriously].  Frank’s–well Calvin’s upbringing in Switzerland was hardly the typical missionary kid upbringing, but then with those parents, how could it be? From the cripplingly funny story of the Gospel Walnut, to father’s needs in the bedroom, this trio is a scream. Admittedly, I found Zermatt to be “less” than the other two books in every way. But the blasting Opera music, the profane Granny in the back bedroom, the girls and Mom being On The Roof.…stop I’m laughing too hard. Time for some of Calvin’s grease bread and a visit to an old Queen. I’ll probably have to re-read these now.

Why not join in and play along on Top 5 Wednesday? Join the group at Goodreads.com then post your list on your blog or in a video on youtube!