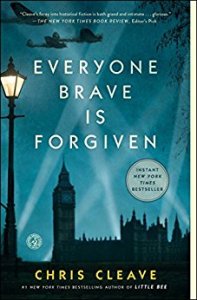 Had I realized when I started that this was by the author of Little Bee, I might have groaned and put it aside. (You can read my review of Little Bee here ). It had all the elements of a story I’d love: World War II London, young people with varied backgrounds in love with each other–so I started listening to it and passed my week’s commute satisfied enough.

Mary and her friend Hilda are somewhat upper class–nothing too grad, but Mary’s father is a Conservative M.P. aiming for the Cabinet. Mummy is very socially conscious–the type of socially conscious that means she knows whether to use the Georgian or the Victorian silver service at her tea for the Cabinet Ministers’ wives. Her butler uses the pewter salver for Mary, the silver for Papa. That sort.

Tom and Hugh share a flat. It was not immediately apparent that Tom was a Grammar School boy. Hugh I believe attended a Public (i.e. Private) School. The war has started and it is about to change from Phony War to Blitz. Of course they will be in it.

Mary meets Tom after volunteering herself to the War Office and being assigned an inner city school teaching post. Tom is a civil servant in the Ministry of Education who coordinates this position. Double date soon ensues with Hilda dragged along for Hugh, but that’s getting ahead of the story.

Zachery is a “Negro” child and his father is a performer in an on-going Minstrel (blackface) show at a theater. The father is an American, the mother is “gone.”

The story takes us thru each person’s war. It was engaging enough that I didn’t mind listening to it and felts for Hugh and Zachery at least. Mary and Hilda came off as Bright Young Things (which they’d have been in the 20s) helping with the 1926 General Strike (ditto), but then the war hit for real and the you-kn0w-what got real.

An enjoyable story. He did a great job of presenting the immediacy of war and the senseless tragedy’s that occur. He pointed out something Britain is coming to terms with today–that “Black” Britons were not terribly welcome as evacuees or in voluntary war service like the Land Girls (recent news story on this). 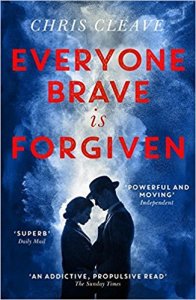 While we almost get a glimpse inside Hugh, he’s the only one, the rest were cardboard. Mary was the kind of girl who likes to stir things up to get attention. She did care for Zachery I believe, but it really was about herself. Especially the lunch out. We can’t change the attitudes people held in the past. She was taking a huge risk and I imagine her father would have come down on her like a buzz bomb if he’d had time off to deal with her! Hilda was just dull and I kept wondering why she wanted an self-centered idiot like Mary for a friend.

There were lapses into ridiculously over-the-top language–not many–just enough that it irritated. I gag at symbolism and metaphors unless superbly done. These were just trite–the “Negro” turned white by the dust–really? I imagine there were a few people who found minstrel shows offensive in that era, but given that Amos and Andy, a “Negro” comedy on American radio was voiced by white actors and that even Bing Crosby appeared in 3 movies, including Holiday Inn and White Christmas (since removed in some editions) in blackface, I’m not thinking most people found it “demeaning” as Mary did. I think she sincerely did find it that way though after coming to know Zachery and his father–this was the only “credit” I could give her.

And, hair spray wasn’t invented yet. Sorry. No spray in salons then.

Overall it was a “good read” so 3.5 stars–the random tragedies of war were done so well I couldn’t give it less than that. 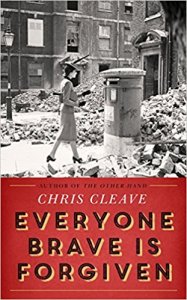 3 thoughts on “Review: Everyone Brave is Forgiven by Chris Cleave”