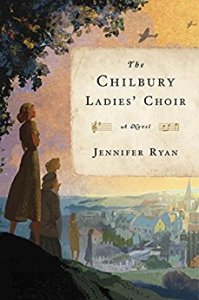 This book, told thru letters and diaries, follows on the heels of my 4 week series on favorite epistolary novels and nonfiction. Sadly, it did not make the cut to be included. In fact, twice I nearly tossed it back. The first time was when I checked it out from the new hardback book display at my library . The second time was while listening to the audio version. That it was favorably compared to the Gurnsey Literary and Potato Peel Pie Club: A Novel still baffles me. I imagine the fact that both are set in World War II and both are in the United Kingdom (or at least WERE in the United Kingdom before the Nazi’s invaded in the case of the excellent Gurnsey book) and that both employ an epistolary narrative must have been enough for the intern charged with writing the blurb on the back of the book.

I expected to love this book. I did like certain moments of it, but found it just too much of an improbabe mess of story lines to be lovable.

Note: Spoilers abound. It was necessary. Skip to the rating if you don’t want it spoiled.

The beginning of the book is all about the trauma of the choir being disbanded by the vicar due to a lack of men left on the home front to sing. This is promptly forgotten except for occasional mentions of the choir here and there until the last chapter. I never really understood how the was supposed to be this uplifting thing, let alone the focus of the story.  Sadly, this is where most reviewers must have stopped reading.

The characters are mostly stereotypes. The matron with the double-barrelled name and the son in the RAF. The Brigadier’s down-trodden wife, who is magically pregnant right as their 20 year old only son is killed. (The bitter tone at the start of the book centers around how awful the son was. That’s right–no one, not even his siblings are sorry he’s dead.)  Their gorgeous debutante-aged daughter, their younger daughter and a still younger Jewish refugee foster-daughter round out the family.

Everyone from his silly wife to the villagers are of course afraid of him. He carries a crop. Of course he does. Apparently, though, the author has never heard that a “horse whip” (as she calls it) of the kind stereotypical British Brigadiers go around thwacking against a thigh or a lover’s bottom is known as a  “crop.”  Surprising he doesn’t have a Labrador. Must have scared the poor thing off. Anyway, this man is silenced by a lady who previously would have cowered in a dark doorway to let him pass. Such is the magic imparted by a good cuppa and an air raid or two.

Then there’s the amazingly modern P.C. elements. The first patient treated from the Dunkirk evacuation is, wait for it…. openly gay (at least he is open about it with the helpful nurse) and, at a time when men went to prison for being gay,  he trusts a total stranger to return his male lover’s ring–and she does it. I’m fully aware that not everyone thought this should be illegal  (nor should it be)–it is just so typical of the immature story lines here. Then the silly young man outs a spy to her! He’s working FOR the spy’s headquarters. You’d think the Brigadier would be right there to beat him with his crop or blast him with his Purdys but no!

Then there’s the flouncing out done to epic levels by the double-barrelled matron’s RAF pilot-officer son when he, too, is done wrong! Epic. But wait! There’s more! He gets to flounce in a letter to the maid he’s just used to get over the debutante who did him wrong. Are you following all of this? But, its about the choir, Silly!

The other characters include a maid, a butler, dueling midwives of the nasty sort not shown on PBS (well at least not till a Downton movie perhaps), the nice, but soon forgotten new choir director and other people in the village Chilbury who suffer a lot once the war heats up, but until then have time to see spies, blackmarketeirs, downed pilots and locate fenced stolen nude paintings. Right, got all that?? But its about the choir? Where is the choir?

Not much. I suppose I liked a few of the people. Mrs. Tilling and her lodger, Colonel Mallard (spellings may be off since I listened to the book). Baby Rose seemed sweet. Sylvie, the little refugee girl. Tom, the London boy out hop-picking and maybe someone else. I’m too exhausted trying to keep them all straight. Baby Lawrence was obviously crying because he couldn’t cope with it all–and him part of the most ridiculous story line of them all. Poor lad. Not even a Labrador to snuggle.

The story is such a mess of intrigue, plotting and boredom that I had trouble keeping everyone straight. The whole thing makes Downton Abbey’s Bates mess seem trifling. Someone–the younger daughter? The refugee girl? Says, just before the retreat to Dunkirk occurs, that “at least we [that is the nearly doomed British Army]  have got all routes covered” [something like that]. Very prescient. Very wrong, too.  Lots of stuff like that. “It’s officially now the Battle of Britain,” is actually said out loud. Yes. That kind of thing. Praise for Churchill, but no memory of all the upper-class twits who were British Fascists and appeasers and loathed him–at least in 1940.

2 stars only because I finished it and liked the Colonel and Mrs Whatshername. Save yourself the trouble and read the Gurnsey Literary and Potato Peel Pie Society: A Novel, instead. I will say that in spire of my opinion of this book, I will try another book by this author–even a sequel. I’m sure she can do better. Let’s hope her success with this book is enough to earn her a good, experienced editor.