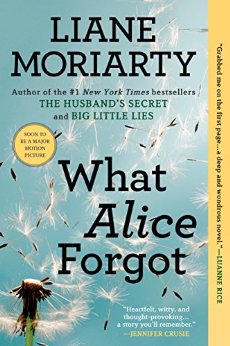 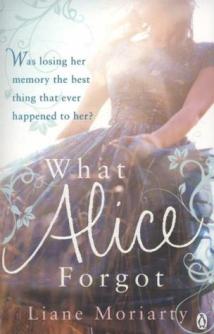 In a recent Top 5 Wednesday post  I named Liane Moriarty as one of the author’s I wanted to read more from. The easiest way to accomplish that is to read her backlist–her older books.

Suburban mother Alice Love falls at the gym and hits her head suffering short-term memory loss of the last ten years of her life. She awakes thinking she is 29, expecting her first child and it is 1998. Only it’s ten years later. As she pieces things together, gradually getting her full memory back, she wonders at who she became in those missing ten years. Can real life earn a do-over?

Alice was apparently that mother–the one who does everything at school, is active in the community, works out like an Olympic athlete and micromanages workaholic schedules for her three elementary school aged kids. Moriarty paints the picture of Alice so vividly I could see the exact tassel earrings, fine boots, and perfectly on-trend jeans she’d just “throw on” for the morning school run. I could see her conducting meetings and hear her clipped “Right…” when someone said the wrong thing.

Husband Nick is a successful businessman who orbits the family with 80 hour weeks at the office and on business travel. I can tell you what he smells like. He’s so many of the men I worked for when I was younger. Decent men, but utterly married to their work.

Then there’s her childless sister, Elizabeth, driven to have a child one way or the other. She’s in therapy and writes to her therapist.

Moriarty’s plots are good, but her characters are even better. Even the children were believable.

Honestly? Not much of anything was “bad,” but a few things were merely not as good as the others. Dominick? He seemed like a cardboard character. No life in him. I also really wasn’t sure someone could get out of the hospital that fast (even here in the USA with draconian insurance companies) after a head injury with extreme memory loss. But, if I debated that there’d be no story, right?

I HAD to finish it! It was that compelling. I love a good read like that. Is this literature? Who cares! I read to relax and enjoy as well as to learn. I’m pretty good at tossing back things that aren’t believable. This was believable–if only because I know nothing about head injuries with memory loss!

I understand there’s a movie coming out–I look forward to seeing it.

2 thoughts on “Review: What Alice Forgot by Liane Moriarty”