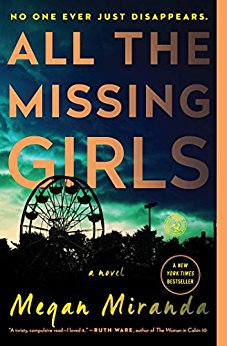 One summer a small town girl goes missing. 10 years later another girl from the same town goes missing. These are “all” the missing girls, by the way. Two. Still, what makes this story so compelling (once you adjust to it) is that it’s told backwards.  Nicolette comes back from the big city to help with preparing her father’s house for sale. He has developed Alzheimer’s and the house has been standing vacant since he was put into a nursing home.  Her big city lawyer boyfriend has just given her a rock a Royal could wear, but her hometown is just that–home.

While I sincerely hope this gimmick doesn’t take off and become the new “in” thing for novels, I applaud the author for such a creative story telling device–backwards really gives a different look at a story–especially a thriller. Once I was comfortable with the backwards progression it was very compelling and I wanted to keep listening.

I felt these were the people I loathed in high school. Each as shallow as I remembered. I felt no sympathy for anyone in the story. The good news is I think that was the point. It’s a hard book to write about without giving spoilers. I must say on audio I got very frustrated trying to keep track of where in time the story was for a while, but I got used to it.

I will be reading more from this author.

6 thoughts on “#Review: All The Missing Girls by Megan Miranda”