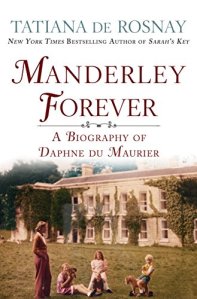 I’ve never enjoyed being frightened–not in real life, not by movies and not even by books. Yet I’ve enjoyed each of Daphne du Maurier’s books. One, of her books, The King’s General, is such a favorite I’ve even dreamed of it!

More than her writing, though, Daphne herself has long interested me. Her husband, Lt. Gen. Sir Frederick “Boy” Browning [aka “Tommy”] was a courtier to Queen Elizabeth before she became queen and to her husband, Prince Philip, after her ascent. This life fascinates me no end. So, when I heard that another spell-biding author, Tatiana de Rosnay of Sarah’s Key fame had written a novel-biography–i.e. a biography written in the style of a novel, I knew I had to read it–or listen to it.

Daphne with her father, actor Gerald Du Maurier and her youngest sister, Jean.

The book tells of Daphne’s privileged childhood as one of the three daughters of one of that era’s superstars of the London stage, Gerald Du Maurier and his wife, Muriel.  Their “Uncle Jim” was J.M. Barrie who wrote Peter Pan and their cousins, Berre’s wards, were the five Llewelyn-Davies brothers who inspired the Lost Boys. As their father’s success grew the family moved from a comfortable London life to a country house for weekends and summer and much more. The three Du Maurier sisters led a privileged life free of the routine of school. Their governess stayed a valued friend throughout their lives.

Daphne, always Gerald’s favorite, thought of herself as “Eric Avon”–a boy. (My strange mind envisioned her as Anthony Eden–Earl of Avon). Hardly the first girl to be a tomboy and give herself another name, but for Daphne this persona never truly left her. De Rosnay makes much of this–seemingly trying to put it into today’s dialogue of gender diversity or gender fluidity which was  very interesting. Daphne defied the conventions of her day. She lived in pants, eschewed makeup, sailed her own boats, maintained a life independent of her husband and his career,  but strangely, gave up driving a car.

I loved that Daphne defended her need to write up to a point. As she came to see, her obsession with her writing, and her obsession with Menabilly–the house of A King’s General where she lives as a virtual recluse for 20 years, cost her the loving intimacy of her marriage. And, it may have caused her husband to break down–though fighting in two world wars likely were the major cause. I understood her need to cling to her career–her sanity-saving writing, but thought she was pretty damned selfish when poor old Tommy came home after six years of war! “Welcome home, darling, sorry old thing, but I’ve got to write so I’ve dumped your kit in what is now your own bedroom, k? Good. See you at tea, Mopey, kiss-kiss, so about the war, hope you’re good now.” That amount of self-focus was a bit much. Never mind that he’d all but stalked her to get a date–the man had helped invent airborne troops! Give him a cuddle or two, lady!

Daphne with Tessa and Flavia

I liked that she grew to adore her daughters. Her disappointment at birthing two girls before finally having a son is the sort of thing that mothers are never supposed to feel let alone disclose. That the girls grow up to be a huge part of her life is redeeming.  Her son, Kits, (Christopher) would stay the light of her life, but she made room for the girls before it was too late. So, too, did I like her not minding her younger sister’s writing career. Though that Du Maurier (Angela) met none of the success of her big sister, she kept at it–possibly for the same sanity-saving therapeutic quality of writing that drove Daphne.

I found her obsessions and possible affairs with various women and a few men to be, well, interesting, but also a bit cliched. As a child she only briefly attended a real school so she had time to ramble and dream, but came into intimate contact with very few people. A governess and a much older cousin are part of her sexual awakening and maturation. Incest (the emotional–not the physical) would continue to be an interest throughout her writing life.

Does being bi-sexual automatically make someone gender-fluid? I doubt it. In her time and place traveling with another woman was much easier and so concealing an affair was much easier with a woman. Affairs were fairly normal in the titled class–though same sex ones were not always as openly conducted as heterosexual affairs. None of the people she was seriously attracted to really left her life, either a situation that truly interested me. She let her obsession evolve or dissolve depending on the person.

The style of the book did puzzle me sometimes. Like the huge biography of President Reagan–Dutch, it became difficult to decide what was a conversation recorded in a letter or a diary and what was a fictional addition or embellishment to the primary source material. How does she know Daphne drank this and thought that? It seems a slippery slope to head down into fictionalizing details. Never mind, the book has earned the a nomination for the Edgar award and has been heartily endorsed by Du Maurier’s daughter, Tessa, Viscountess Montgomery of Alamein (Yes, married to the son and heir of THAT Montgomery–Monty the British General who won the battle of El Alamein.) The book was very enjoyable–much more so than a dry biography of an author done the traditional way.