“She graced history, and she graced our lives”

(Ted Kennedy, quoted in The Editor)

I’ve written many times before of my paternal grandmother’s love of the Kennedy family–espeically Jack and Jackie.  This book caught my eye for that and because as I work toward publishing my first book, I was fascinated by any story of the editing process for a novel. I was fearful though, I’ve been burned a few too many times recently on historical fiction of people I’ve read masses of material on. I’ve seen historical figures I love and/or am intrigued by rendered in cardboard with floods of stilted, ridiculous words flowing from their cartoonish lips. 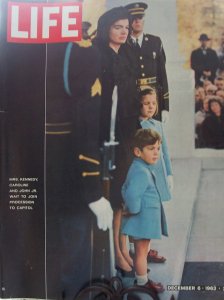 I suppose, sadly, today there likely ARE Americans who don’t know who the very young lady in black and those two small children, oddly dressed in English fashion, are or what the event was. Jacquline Kennedy with John, Jr., and Caroline at President Kennedy’s funeral

Return to the 1990s. Author James Smale hits it big, landing a book contract with Doubleday and a shot at working with the world’s most glamorous editor–Mrs. Jacqueline Bouvier Kennedy Onassis, “Jackie O” to the world’s press. Only Princess Diana comes close in terms of name/face recognition around the world and across the generations.

James and his partner (gay marriage was not yet a legal option back then) Daniel are fairly typical young creatives living in a less than fabulous apartment, trying to pay their bills, when fate sends James the contract for his novel based on his own family, especially his mother who, not surprisingly admires Jackie.

As James and Jackie develop their working partnership on the book, Jackie, or “Mrs. Onassis” as James calls her to her face, pushes James to dig deeper. She challenges him to get his mother’s story. Finally, accidentally, over a family Thanksgiving at which much wine flows, James gets not only his mother’s story, but a missing link of his own story [No Spoilers].

Jackie in 1994–the time of The Editor

What I Liked or Loved

I LOVED Rowley’s “version” of Jackie. The very young first lady in that now iconic pink pillbox hat and the pink suit stained with her murdered husband’s blood is now right at the normal retirement age for her generation. She is comfortable in her own skin, confident as an editor, but still deeply private. She is the educated, sophisticated woman who oversaw Camelot and now oversees Manhattan from her graceful apartment. She is mom to the Hunk Who Flunked and to the future U.S. Ambassador to Japan. She is comfortable with the creative types more than with the politicians who still seek her blessing.

No spoilers, but this desk has a funny scene in the book. I loved the way Rowley wrote Jackie, especially her humor and sense of fun.

I loved the interplay with the Clinton nominating convention and his Inaguaral–meant to evoke that of JFK right down to a poetry reading. I remember the excitement of that campaign–the energy Clinton brought to the arena, the now famous photo of him shaking hands with JFK in the Rose Garden of the White House at Boys Nation. When James says something about the “baton” being passed to the new generation I shouted at the car stereo “TORCH! TORCH” for that is what was passed to the next generation in JFK’s ardent inaugural address. But James was musing, not quoting anyone. I’ve still got Fleetwood Mac belting out “Don’t stop….” in my brain.

But what resonated with me most was that (no spoilers) Thanksgiving revelation because it mirrored one about someone in my life–and, like for James, it put the final piece into the puzzle.

Finally, I loved the road trip at the end. And his mother’s other revelation–the one with the phone call. So Mom-like. Something we’d all do as Moms. Her statement [paraphrased] that she had “never met anyone more himself than you,” is a mother’s astute but loving observation.

Jackie had taught James a good bit about his mother–a member of her own generation.  She tells him:

“…we were duty-bound. Things were expected of us.”

Those things focused on marrying well and raising decent children, but it was a sacred duty. Her earnestness at that moment shows exactly why she put up with a philandering if amazing, first husband. It was her duty–something my generation does not and cannot understand (and often I’d say thank goodness, too).

I like the way Jackie teased James about her autobiography, finally letting him see the truth:

“…if anyone has bothered to pay attention to the work I’ve done they would know that I’ve been telling pieces of my story all along.” [Jackie says]

[James] “I’m sudddenly more in awe of this woman than I ever have been. ‘Through the books that you’ve edited….'”

I was not at all surprised to learn that the film rights have already been snapped up.  I could almost see the film as I listened to the audio version of this marvelous book.

The Editor: A Novel by Steven Rowley 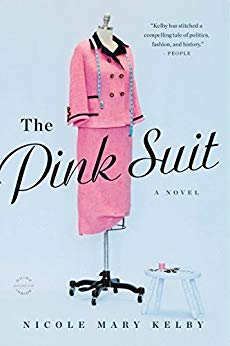 My review from my old blog: The word “iconic” is woefully overused today. But it is the only word to describe the pink suit and pillbox hat that Jackie Kennedy wore on that fateful day in Dallas in November of 1963. This is the story of that dress–the fictionalized story–of how it came to be. In the final days of a world in which people “knew their place” based on their socio-economic level, the seamstress who works on the ensemble, a Chanel original copied legally so that Mrs. Kennedy can be said to be wearing a suit by an American Designer, comes to terms with who she is and where she belongs.

15 thoughts on “Review: The Editor: A Novel by Steven Rowley”