A Note on That Name

Many American’s are aghast at the choice of “Archie” for it instantly brings to mind t.v.’s most celebrated bigot, Archie Bunker. Across the pond, however, Archie is one of the most popular boy’s names right now, hitting the same demographic of parents that would choose “Liam” or “Noah” here in the U.S.A. Something tells me Archie will soon break into the Social Security Administration’s Top 1000 names–even top 100 names, for boys in 2018/19.

First, a bit of royal trivia:

“Gan-gan” is not a name little Prince George thought up. The Queen referred to her Grandmother, Queen Mary– that is her children’s Great-Grandmother, as such in her televised Christmas speech one year with Andrew and Edward as they looked at old photo albums. It is the royal family’s name for their Great-Grandmother. Harry also used it to refer to the Queen Mother in a fairly recent documentary that included home movies.

Archie shares his May 6th birthday with a few higher-ranking royals of the past.

Under the old Russian calendar, the last Tzar of All the Russians, the murdered Nicholas II, was born on May 6, 1868. Under the modern calendar the date was May 18. Nicholas, left, is shown here with his look-a-like first cousin [the future] George V. George V was Gan-gan’s Grandpapa England. Baby Sussex has Grandpapa Wales (i.e., Prince Charles). 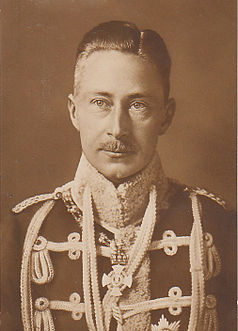 It’s easy today to forget how inter-related royal families used to be. Prince Philip and the Queen are BOTH descendants of Queen Victoria and of Christian IX of Denmark! Elizabeth’s uncle, Prince George, Duke of Kent, married Philip’s first cousin, Princess Marina of Greece and Denmark! All but two of Queen Victoria’s nine children married other royals. Her eldest daughter, also named Victoria (aka Vicky) became Empress of Germany and was the mother of World War I’s Kaiser Wilhelm. Baby Sussex shares his birthday with the last-born heir to the German throne, Crown Prince Wilhem (aka Willie), who was born May 6, 1882.

Late, great-great Aunt Margot, aka Princess Margaret, Gan-gan’s sister, married Anthony Armstong-Jones, 1st Earl of Snowden on May 6, 1960. He would be the last royal spouse (to date) given a peerage.  Baby’s Great-Aunt Anne (the Princess Royal) is the eldest bridesmaid, standing in front of best man (he was a last-minute replacement).

There has been speculation that George and Amal Clooney, who attended Harry and Meghan’s wedding, might be chosen as Godparents. That speculation was ended today by Clooney himself–you can read about it here. Even so, what were the odds of baby Archie arriving on George Clooney’s own birthday?

George Clooney was born May 6, 1961 in the lovey university and horse racing city of Lexington, Kentucky and is the nephew of singer Rosemary Clooney.