Just like last month, June’s 6 Degrees chain starts with a book I’ve not read! Murmur has an intriquing cover. The story does sound very interesting–a novel based on a real person. Here is the blurb from Amazon:

In Murmur, a hallucinatory masterwork, Will Eaves invites us into the brilliant mind of Alec Pryor, a character inspired by Alan Turing. Turing, father of artificial intelligence and pioneer of radical new techniques to break the Nazi Enigma cipher during World War II, was later persecuted by the British state for “gross indecency with another male” and forced to undergo chemical castration. Set during the devastating period before Turing’s suicide, Murmur evokes an extraordinary life, the beauty and sorrows of love, and the nature of consciousness.

So, like last month, my chain will likely involve free association.

My review from my old blog:

Unlike most books on breaking the code that focus, well, on BREAKING THE CODE, which to my mind is boring, this is very enjoyable telling of LIFE at Bletchley Park. What it was LIKE to be a goose who never cackled. Fascinating. And, lots of photos to connect names and faces. Olivia Newton John’s father was one of them–imagine! Bletchley People: Churchill’s Geese That Never Cackled by Marion Hill.

Author William Stevenson invented the work of James Bond. Well, sort of. He was a World War II British “spy master.” So Alan Turning, the man who inspired Murmur, worked for him, as did James Bond’s creator, author Ian Fleming–among others. David Niven played him in the 70’s t.v. mini-series version which prompted me to watch the series (I’m still a big Niven fan) and then to read the book long, long ago. A Man Called Intrepid by William Stevenson. 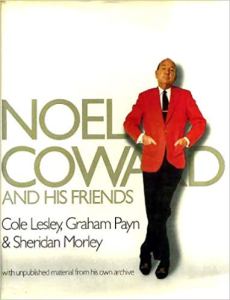 Noel Coward, whom I “adore” (one couldn’t say one loves him, one must adore him), was not only one of the cleverist lyricists every, but a brilliant playwright and a spy. He was also homosexual. He was one of my first love affairs with gay men. (Elton John being the first. I was 12 when I discovered Elton, about 16 when I found Noel). He was also a good friend of Ian Fleming’s, and of David Niven. I still have this marvelous book on him, though I’ve long since sold off the books of his diaries and plays–those were a teenage obsession. Noel Coward and His Friends.

The next book that came to mind was H is for Hawk due to T.H. White’s personal life. The Hawk parts of this book mesmerized me. Poor White though. What a sad story. But white taught at Stowe, which David Niven attended.

My review is here.

The hawk part of H is For Hawk reminded me that James Bond was named for the author of the book, Birds of the West Indies. Ian Fleming chose the name for it’s ordinariness. After all, a spy should blend in. You can read more about the book, it’s author and the 007 connection here at: The Smithsonian’s Bond, James Bond: the Birds, the Books, the Bond.

Noel Coward and Ian Fleming loved loved their paradisal homes in Jamacia–where Fleming came to know the Birds of the West Indies–both the book and the actual birds themselves. Another Englishman who knew a thing of two about foreign affairs (but seemed to forget everything he knew in the Suez Crisis) was long-time British Foreign Secretary, later Prime Minister, Anthony Eden, who recuperated from his botched operation and the stress of Suez at Fleming’s Goldeneye estate in Jamacia. He was a long-time friend of Noel Coward, too. But since all his biographies are dull as dirt, I’m giving you the memoirs of his second, much younger wife, Clarissa Churchill (Winston’s niece) who hobnobbed with lots of literary types and probably spied on people coming to speak to her husband at Number 10. You can read more about one Britian’s youngest Prime Minister’s wives in my post: Cross-Generation Romance at 10 Downing about Anthony and Clarissa Eden.

6 Degrees of Separation is hosted by Books are my Favourite and Best. Why not join in and do a post next month? The chain starts with Where the Wild Things Are.

5 thoughts on “Six Degrees of Separation: Murmur by Will Eaves”