Hands up! How many voted in the last election? Not only the one for president but your most recent LOCAL election? I thought so. Yes, at the dawn of the last century, women in the U.S. and Great Britain and most other countries could not vote, often could not own property, lost control of their assets if they married, lost their children if they divorced, could not obtain birth control, were blamed for rape, and were at the mercy of male relatives if they were unmarried an unable to support themselves by doing whatever very few occupations were open to “spinsters” of their social class. In short, they were dominated by the patriarchy.

The more things change, the more they stay the same is an adage we’ve all heard. History repeats itself, is another. Sadly, too many take no heed of the truism that ‘Those who do not learn history are doomed to repeat it.’ Today women are back at the forefront of increasingly radicalized politics–#Metoo, the Squad in Congress, the demands that women be recognized for their accomplishments–often previously credited to men alone, and, most of all, that they finally be allowed to lead.

It was all there in 1900–and it all required one thing: The Vote for Women! That was early 20th Century speak for “Death to the Patriarchy.” (They weren’t big on misogyny either.)

In Old Baggage, Matilda Simpkin, is a veteran crusader for the Vote–she has the medals awarded to Suffragettes for enduring prison hunger strikes to prove it, too. It is now 1928 and women finally, FINALLY, are soon to have the vote. She has spent most of her adult life working for “the cause,” has not married, but continues to look for new ways to advance women’s lives.  Making her life with a platonic female companion /roommate and fellow suffragette, Florence Lee, aka “The Flea,” Mattie forms a girls club in opposition to a new fascist-oriented youth group. Part debating society, part nature walk club, part fun and games, the “Amazons” are girls from across the classes, but most are from the upper-middle class. When a competition against the two youth groups is organized, Mattie, unsettled by a recent discovery, compromises her usually integrity and suffers the brutal consequences.

As for the Amazons, that is the girls, Ida is the plucky working-class girl, Inez and the twins, from the upper levels of society, are rather spoiled and Inez is just plain annoying and disconnected from life. All show the disparities in life experiences and expectations at that time. When Ida aptly analogizes Inez as the Prodigal Son, she has no idea how close to the truth she comes. Throughout it all Mattie pushes the girls to think deeply, to construe meaning and to improve themselves. After her reckless act damages her credibility, Mattie finally has to face herself and think deeply herself about herself, her life and her actions.

While Mattie seemed to me a sort of Queen Mary or Margaret Thatcher figure,  her companion, the Flea was so wonderful, so relatable. As an unmarried woman of respectable birth who has had to earn her living as a home health visitor, the Flea is the essential “useful spinster,” (as Downton Abbey’s Lady Edith once put it) –the necessary common-sense person behind Mattie. She is the one with the organizing ability, the mind for the endless little details, while Mattie is the mouthpiece, the speech giver, the schmoozer, and lobbyist. Today Mattie would be Prime Minister, while the Flea would be her Chief of Staff (or whatever that person is called at 10 Downing).

The ending though left me wondering why it had been necessary. It seemed like another potential pitfall and one brought to hand at the wrong time of life. I understood the storyline needing an ending, but I was left unsettled by it all–especially by Mattie’s complacent acceptance. “Unsettled” was not an emotion the rest of the book ever caused and complacency seemed out of character for Mattie. But that is one tiny moment in an excellent book.

Thank you to Dwell in Possibility and A Life In Books for alerting me to this novel.

No Surrender: A  Novel by Constance Maud (1911) is available for $0.99 on Kindle right now.  I apologize–I forgot to note the blog where I learned of this book. I am currently giving it a try. If I finish it, I will review it. It might be too much Suffragette reading for right now. 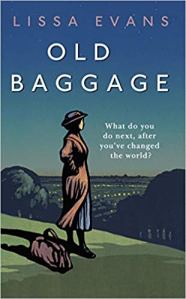 11 thoughts on “Review: Old Baggage: A Novel by Lissa Evans”