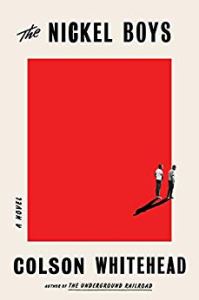 …the immense exertion white people put into grinding them down….

Elwood Curtis is doing well in life and in school in early 1960’s Tallahassee, Florida, when he hitchhikes to a college class he’s been allowed to enroll in in high school and accidentally changes his destiny. He lands at the Nickel Academy–a Florida reform school for boys that is a special circle of hell.

Colson Whitehead is one of THE authors of our time whose works are destined to be classics–especially The Underground Railroad, but Nickel Boys, too, will easily make that cut. My reading of this book was influenced by a [white] relative’s time incarcerated in the modern version of a reform school–a rehabilitative community prison for juvenile offenders. While it was nothing like Nickel in terms of the gruesome punishments or the predatory staff, there were still common elements. Like the impossibility of getting a real education. That still lingers in every prison setting.

I have lived in a ruthless African dictatorship and studied the Soviet Union extensively, so none of the torture or violence was a shock to me. I remember Dr. King (he was assassinated on my mother’s birthday) and know that, while it might be arguable that things are not as bad as his day, things are again sliding in the wrong direction in terms of racial discrimination. This book is a good reminder of how bad it was and how bad it must never be again.

The WOW, Wow, Wow, at the start of this post refers to what, “made” the book. To say more would be to totally spoil the story. This “story element” does prove my point about the author being one for the ages though.

The Nickle Boys: A Novel by Colson Whitehead

I listened to the audio version.

For another fictional look at institutionalized youth in despicable conditions see:

For nonfiction on our prisons and criminal justice system see:

An American Summer: Love and Death in Chicago by Alex Kotlowitz

8 thoughts on “Review: The Nickel Boys: A Novel by Colson Whitehead”