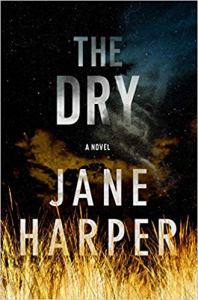 This book started the chain in the book meme Six Degrees of Separation a few months back and I thought then that it sounded interesting. I also have a friend who lives in a rural community in the Australian state in which the story is set and that is affected in turns by draught and truly town-wrecking floods. So when I was going through my TBR looking for available audiobooks a few weeks back, I requested this one. I’m so glad I did!

A grizzly murder brings up old secrets forcing local boy-turned-federal-agent Aaron Falk to return home to investigate. Oh, and that old murder? Falk was suspect for a while! You know how small towns work–no one has forgotten. Was the husband jealous? Did he come home to something unexpected? Was it the girl’s father? Was she being abused? This story moves at the speed of whitewater rapids! Is a gun more dangerous than a cigarette lighter? So many who-what-where-why’s in this one!

My first thought was the sheer amazement that this multi-layered story was being told superbly by a debut author! With a rolling style of storytelling reminiscent to me of the flow of Gosford Park or Downton Abbey (i.e. Julian Fellowes), the story’s pace never slows, which occasionally gave me trouble as I was driving and listening to the audio version.

I especially liked the moments when Aaron was looking back at his teenage self and circle of friends. Hindsight may not make 20/20 vision, but it helps. His thought that “what if Ellie was abused–why didn’t I see it then,” shows as much about the self-centered nature of the teenage years as it does about the maturity of middle life. I also was really “got” by him putting down the shotgun, unable to kill rabbits (which are a menace in Australia and must be culled).  This is a man who has learned a few lessons. Then there was the fact that he made mistakes. Those make the story much more interesting anytime. For what it’s worth, I had a giggle at the small town cop doing a firearms inspection and telling the man he was “letting him off” even though when there was clearly no violation–so small town!

Overall I was left breathless from the pace and wanting to move directly on to a second Aaron Falk book. Thrillers are not my typical reading. Chief Inspector Gamach, Anne Perry’s William Monk, and even the Ladies of the No. 1 Ladies Detective Agency are my “breaks” throughout my commuting year. I’m happy to have a new author to go to when I need a break.

Now to quit giggling over “Pokies” for online poker players and “fireys” for firemen.

The Dry: A Novel by Jane Harper, was recently made into a movie.

6 thoughts on “Review: The Dry: A Novel by Jane Harper”