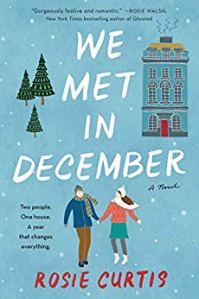 When Jess takes her dream job in publishing in London, a friend offers her a chance to share a house in Notting Hill, a location she couldn’t afford ever, she jumps at it. The housemates all get along, but one stands out to Jess–Alex. A lawyer retraining to be a nurse, Alex has that “spark.” He takes Jess on walks to different places in London and along the way they become good friends. But, it’s complicated. Both are very British and so don’t butt in or pry–but maybe they should?

Either I missed the first mention in a bad moment in traffic (it happens since I listen to audiobooks on my daily commite) or else “The Book” [no spoilers] was only mentioned at that cruicial point. “The Book,” if you’ve read it, makes the story crystal clear, but I immediately sensed a slight change to the ending. I was right.

This was a standard chick lit novel, but at times it grew annoying. Neither Jess nor Alex could bother to ask a follow-up question that would have solved their problems. Even for chick lit, which is never deep and isn’t really supposed to be, the characters were not well enough developed for me to keep them straight beyond Jess, Alex, and Rob. James made me flash all the back to the 80’s to Richard in the movie The Big Chill. I was also glad that “The Book” was mentioned because I was begining to scream plagiarism (sort of) since I’d read it and seen the movie and loved both. I do give the book high marks for allowing a platonic relationship to develp over more than a year. Gee, could that be why they learned to like each other?

The story also got confusing because I’d just read The Flatshare [review below], which also features a young woman in her dream job in the London publishing world and a guy who is a nurse (I think both nurses may even have had/looked at a flat in the same almost affordable neighborhood). Overall, I give The Flatshare the higher marks.

We Met in December was still fun, just not as much fun as it’s rival The Flatshare. I’ve rated it 3 stars since this is the author’s first book–I’m confident she will get better with each new book.

We Met in December: A Novel by Rosie Curtis is currently $1.99 for Kindle

Tiffy is in a bad place. Her boyfriend, Justin, is great on paper, not great in real life. She has to be her own flat–must move out of his. Unfortunately, she’s a junior editor at a publisher specializing in DIY books so can’t afford anywhere in London. In desperation, she decides to try the add for a flatshare with one flaw: There’s only one bed. Not that she will be co-occupying it though. The man with the lease is a nurse and works the opposite shift. One in the bed at a time. Leon, too, has a less than fab partner. In fact, it is Kay, his girlfriend, who interviews Tilly and approves her as the flatmate. After Tilly moves in she leaves Leon a note and begins their getting acquainted on paper. Finally, though, the day comes when the inevitable happens (no spoilers) and then things really get going what with crochet, an Instagram influencer, a bunch of old men with the same name, and a girl named Holly.

This was such a fun book. It is not corny, it is not too-light, it is just a darned good read (well, “listen” in my case–I listened to the audio on my commute). I fell for Tiffy and Leon instantly. My new book “crush” [that should tell you how old I am–probably no one says that now]. I’m pretty sure no one ‘ships couples anymore either, but wow! What a ‘ship! This is perfect to be turned into a movie. I hope unknowns are cast as the leads.

The Flatshare: A Novel by Beth O’Leary

4 thoughts on “Two Reviews: We Met In December: A Novel by Rosie Curtis and The Flatshare by Beth O’Leary”