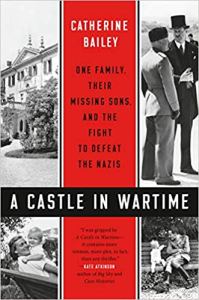 If you’ve seen Tom Cruise’s film The Valkryie you know that not everyone fully supported Hitler. There was a German resistance movement even within the Wehrmacht. One of the Valkryie conspirators was Ulrich Von Hassell. He was later executed for his part in the plot to kill Hitler. His daughter, Fey, had an interesting war as well. This book tells her story from after the time of Valkryie until the end of the war. 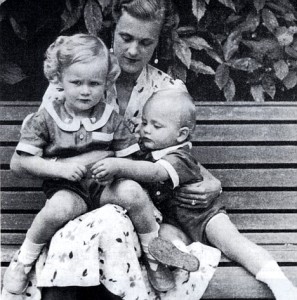 Fey and her sons

Fey Von Hassell was a very privileged young woman who married an equally privilege Italian aristocrat. Not only was Fey the daughter of a Valkryie conspirator, but her maternal grandfather was Kaiser Wilhelm II’s Admiral Alfred von Tirpitz. She grew up on a fine estate and her family’s friends had all been in the Kaiser’s own circle. Her husband’s family had similar connections, only in Italy. After Valkrie, with her husband in Rome in the new Italian government as a cover for his resistance work, Fey is taken into custody and separated from her sons.

As the war grinds to its end, Fey and other “Sippenhäfltlinge” (kin of prisoners) are moved from location to location–sometimes to concentration camps, but never in the same circumstances as the Jewish prisoners awaiting death. They were all Germans, Aryans, but the relatives of “traitors.”

As happens in wartime, miscommunication hampers Fey’s ability to make sense of it all. Arriving at one destination, some of the little party of “Prominenten” prisoners, who by now included prominent POWs such as two men providentially named “Churchill,” but who were, in fact, no relation to Winston,  are reunited with their seized children, but Fey is not. As Himmler uses the group as a bargaining chip, Fey becomes determined to make a change in her life that seems impossible, but that gives her comfort to survive teh moment.

Finally, at war’s end, she realizes the intended change in her life cannot take place and that she must try to find her children again, all the time fearing that they have been given new names and perhaps even been adopted by a new family. Bureaucracies of several nations now stand in her way, yet she and husband Detalmo, are determined to find their boys.

I do not seek to minimize Fey’s very real trauma, but I was somewhat relieved to read her words of angst at having been in the camps, however briefly, and not had to suffer as the Jewish prisoners did. At no time did she go hungry. Occasionally in travel, there were uncomfortable conditions and yes, her life was in danger from bombing and later from execution–an extremely traumatic idea to live under. Unlike those in the concentration camp awaiting their deaths, Fey’s suffering was confined to about a year at the end of the war. Did she suffer trauma? Of course many times over. But nothing compared to the Jews.

She was right to be proud of her father, whose personal moral code could not stomach Hitler. No one could resign a commission under Hitler, so he did what he could and helped plot to kill the man. Her husband, too, worked with the resistance in Italy to end the war. Those are proud accomplishments speaking of the best morals and true courage.

I have read other books on German aristocrats in the war and most leave me wondering “why are you complaining?” [See the bottom of this post for reading suggestions]. Fey, though, had a mother’s greatest nightmare come true and lived through it. That, too, is a proud accomplishment. That the search for her sons was not that arduous compared to that of many displaced persons, does not lessen the trauma the events inflicted on her.

A Castle in Wartime: One Family, Their Missing Sons, and the Fight to Defeat the Nazis by Catherine Bailey

The Lost Boys: A Family Ripped Apart by War by Catherine Bailey.

A World Elsewhere by Sigrid MacRae, link is to Amazon (I do not make any money if you click)

I reviewed this one on my old blog.

The Women in the Castle: A Novel by Jessica Shattuck, link is to my review.

One thought on “Review: A Castle in Wartime by Catherine Bailey”