Say books about life in an institution and for many, Jane Eyre, One Flew Over the Cuckoo’s Nest and, “Please Sir, I want some more-“ Oliver Twist, come straight to mind. I’ve read Jane Eyre--it was one of my first classics conquered and enjoyed. In addition to these fabled classics, there are many more such books out there. I’ve read a fairly good variety of them–both novels and nonfiction.

The Ones I’ve Read

This book is huge in more ways than just size. The characters. The alliances. The oddness of the place–huge. It was worth it though. I found my friend Silva Cachia has archived the discussion posts for Gray House from 2017–I found this a valuable resource when reading the book. Here is my full review of Gray House by Mariam Petrosyan.

A boarding school for “Indians” [Native Americans] in Minnesota during the Great Depression was not a fabulous place to be. For two brothers who were not “Indians” but who were dumped there supposedly due to no room in the local orphanages, it was even worse.  You can read more about the story–and my full review here. This is a contender for my favorite book of 2020. This Tender Land: A Novel by William Kent Krueger.

Florida’s Nickel Academy is a reform school to which young offenders are sent. Elwood Curtis makes a bad choice pursing a good plan and lands there during the Civil Rights-era. This story is told as only Colson Whitehead can tell a story–Wow! was my main reaction when finishing it. You can read more about the story–and my full review here. Nickel Boys by Colson Whitehead

If you are my age (58) you likely remember who you watched the finale of the long-running television show, M*A*S*H* with, and maybe even taped it on a now museum-worthy video cassette recorder (VCR) a then new-fangled gadget. The original story, a novel by Joseph Hooker, was a best-seller in the late 60s and early 70s. The movie, far better than the series, touched the right nerve in Vietnam-weary Americans. The only flaw I recall in the movie was the use of 1970s football helmets in the game scene. The film’s success all but guaranteed the success of the television show.

Old age pretty much sucks. And, being stuck in a nursing home in Amsterdam isn’t much of a life–unless you are Hendrick Groen. This is a funny spoof-diary reminiscent of some of the attitudes expressed in the old British TV Show Waiting For God. I haven’t reviewed this book because I ran out of time the library copy I borrowed. I do hope to get it again and finish it–it was fun. The title itself is a wonderful homage to Sue Townsend’s The Secret Diary of Adrian Mole, Aged 13 3/4.   The Secret Diary of Henrick Groen Aged 83 1/2 years.

A Christian Turn-Straight Program. Oh, the horror. A Church with the initials G.O.P. Cue the maniacal giggling of a morning drive-time on-air personality’s side-kick. This book is much more than the sniggering suggests. It is much better than the in-jokes as well. You can read my full review here. Miseducation of Cameron Post by Emily M. Danforth.

When the Nazis take over Czechoslovakia children are rounded up and examined by Nazi doctors looking for “Aryan” children. Milada is one deemed acceptable. She is taken off to be re-educated in the Lebensborn program where she is Germanized or Nazified and given the new name of Eva. You can read more about Lebensborn and read my full review of the book here. Someone Named Eva by Joan M. Wolf 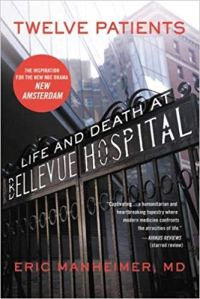 This look at New York’s famed Bellevue Hospital was my favorite nonfiction book read in 2019. The stories of each of the patients each reveal new facets of life in the sprawling hospital complex. The hospital’s head is the author so we have privy to the top level of information as well. My review of  Twelve Patients: Life and Death in Bellevue Hospital by Eric Manheimer.

In case you missed it, yesterday’s post was a review of the Japanese novel, Sweet Bean Paste, which has a storyline telling of life in “leper colony”–a Hansen’s Disease [then known as Leprosy] Sanatorium in Japan. You can read it here.

Do you have other titles that should be on this list? Link to your review or simply leave me a comment–I love learning of new, or new-to-me, books on any topic.