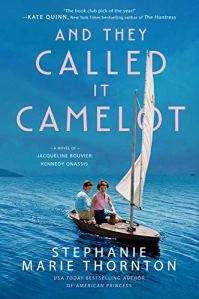 I’ve read so much on all of the Kennedys that I wasn’t sure I would go through with reading this one. I have a huge section in my personal library of Kennedy books–starting with the ones my paternal grandmother bought after the President’s assassination. Often knowing a subject so well makes reading historical fiction about them difficult. Happily, this book was way better than I thought it would be.

The largely familiar lives of Jacqueline Bouvier and John Fitzgerald Kennedy are re-told by Jackie from January 1952 until after the President’s death and the death of Jackie’s second husband, Aristotle Onassis.  First-person worked well in this case–the story unfolding with a fairly accurate Jackie-like cadence. I could feel her emotions–that is what makes historical fiction work. I could feel her life as she was telling it. More than that, I could see why she loved Jack–flaws and all.

Occasionally the dialogue got a bit over-the-top, such as when Jack says “I feel like I’ve birthed something monumental” (p. 91) after “writing” Profiles in Courage with his future speechwriter Ted Sorrenson. On the whole, the dialogue was fairly normal and believable and the story stayed to the familiar path so many Americans of my age or older know well.

One crucial scene was ruined for me though by the author getting a bit carried away with language–specifically with what I call “verbing.” No spoilers, but when you read the word “fauceting” you’ll figure out which scene it was used in. What a silly thing to do! It sucked the seriousness right out of that most hallowed scene.

And They Called it Camelot by Stephanie Marie Thornton

My mother, a die-hard Jackie fan still at 83, devoured this book in about one sitting. That’s a great recommendation in itself.

For another novel about Jackie see The Editor by Steven Rowley

8 thoughts on “Review: And They Called it Camelot by Stephanie Marie Thornton”