The ocean voyage that started and nearly ended the waves of settlement in North America. I always say the country was settled by religious fanatics [they wanted to be free to worship THEIR way–they were not seeking religious freedom for ALL–hence the need for other colonies for other faiths] and real estate developers. This book proves it! This is nonfiction the way it should be written–it reads like a novel. The documentary made from it is almost as good.  Mayflower: A Story of Courage, Community, War by Nathaniel Philbrick.

Having named the author’s previous novel, Loving Frank, as one of  my favorite books of 2008, I was pretty sure I would love her newest book–the story of Robert Louis Stevenson and wife Fanny Osbourne and I was right. Like Loving Frank, this story was enthralling! I found myself sitting in the parking lot at work or the driveway at home and listening to “just a little more” each time. Fanny, likely bi-polar, was a fierce protector of her husband [Robert] Louis Stevenson. Their shared quest to find a place to restore his health, their love, their passions for their work–all added up to a very fascinating story. No spoilers, but the end hand me in tears–it hit very close to home mirroring a scene in my own life. Nancy Horan has quickly become one of my favorite authors as well as a role model for me as a writer. [From my old blog]

Under the Wide and Starry Sky by Nancy Horan 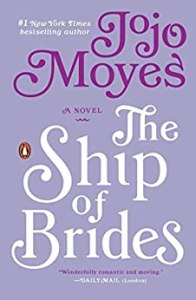 War brides are one group I could read about almost endlessly. What faith and courage they had! So many just endured, too. Some were very happy, others so unhappy, yet they just got on with life. I wish there was a sequel to this one, but with Jojo Moyes in the big-time now, I imagine she only wants to do new stories and I can’t blame her! Ship of Brides by Jojo Moyes

Rose Kennedy and four of her children, including her mentally disabled daughter, Rosemary are sailing home to America at the beginning of World War II. On the ship are the famous and the not-famous–all with fascinating stories of their own. The Ocean Liner by Marius Gabriel. Read my review.

What was it like to travel aboard one of the most famous ships in American history? Why was a passenger ship sunk by the German Navy in World War I? As always with Erik Larson, the story keeps you spellbound. Dead Wake: The Crossing of the Lusitania by Erik Larson

Harriet Chance sets out on the cruise her dead husband of many, many years has planned. What will she learn? This is Your Life. Harriet Chance: A Novel by Jonathan Evison. Read my review.

When I posted this book a little while back a few readers had much better thoughts on it than I did. I didn’t enjoy it! A child on an ocean voyage, experiencing many things and trying to make sense of them sounds interesting. To me, it wasn’t. The Cat’s Table: A Novel by Michael Ondaatje 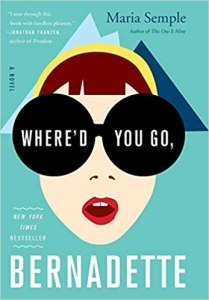 This one is such a fun memory! Worth it for Bernadette’s mutterings in the private school pickup line. Where’d You Go, Bernadette? by Maria Semple, Read my review.

Will Taft, Nick Longworth, Alice Roosevelt, and many others on a cruise to build American’s not-so-secret empire. What could go wrong? The subtitle was not included in the review I read, so I stupidly thought this would be about the cruise Alice Roosevelt went on with [then future President] William Howard Taft and her own future husband Congressman Nick Longworth. Alice is usually a good read all by herself, but throw in Taft and the ladies man Longworth and I thought I’d have a hit. Instead, I’ve got an interesting, but difficult read on American Imperialism. Bradley seems to truly loathe America, Americans and Theodore Roosevelt in particular. The Montana-sized chip on his shoulder makes his writing irritating. I totally agree with his opinion on most of the Imperialist actions of the US Government in this period of history, but his strident hatred and condemnation made me start wishing the book was over!  (From my old blog) The Imperial Cruise: A Secret History of Empire and War by James Bradley.

Do you have a favorite fictional or nonfiction book on an ocean crossing? Leave me a comment or a link to your review.

8 thoughts on “Ocean Voyages! Books to take a sea journey”