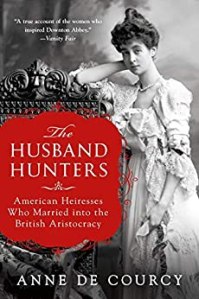 I have enjoyed all of Anne De Courcy books and social history is a favorite genre of mine. This book then was a must-read.

For a variety of reasons, the British Aristocracy was in a financial debacle from the middle of the reign of Queen Victoria onward. Those stately homes Noel Coward would later immortalize were ridiculously expensive to maintain. [Not many years ago, Princess Diana said somewhere that a new roof for Althorp would be in the neighborhood of 6 million pounds.)  The eldest sons of these stately homes needed to marry wealthy women. Unfortunately, the normal gene pool from which they chose their wives (i.e. the same aristocracy) operated under primogeniture–all wealth is passed from father to oldest son. This was why, in 1922, Edwina Ashley, soon-to-be-Mountbatten was such a catch–British and ridiculously rich as her family lacked male heirs and had wealth not entailed upon a title.

Enter the American girls! Peers nearly lined up for the chance to marry an American girl with a fortune. Winston Churchill’s mother, Jennie Jerome, was one of the first. In fact, Winston’s impending arrival was likely why the wedding came so fast. He was a robust 8 lb “premature” baby. Jennie, though, was just one of many, and she only captured a younger son, not the heir. 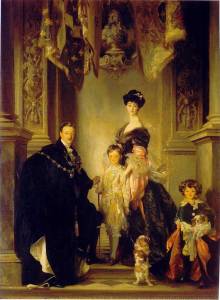 Perhaps the most famous of these brides was Consuela Vanderbilt–who went up the aisle in tears at her forced marriage to Winston’s cousin, The Duke of Marlborough. Like Consuela, many of the girls were at least “encouraged” to marry an aristocrat by their socially-climbing mothers. The aristocrats did not always know the social distinctions of America, so mothers used this to their advantage. Few of the marriages were genuine love matches, but many became happy unions. Others were nightmarish. Given the girls had two purposes–to fill the family coffers and to provide at least the fabled heir and spare–and to do so with little or no knowledge of the “process” and with a man they barely knew! One poor girl was even married off into this world at 16. Given all of this, it’s not surprising that many were miserable.

I enjoyed this book very much, even though I knew quite a bit about several of these women already. I especially enjoyed the chapters featuring the Prince of Wales (later Edward VII) and his American women–Jennie Churchill among them and on Newport, Rhode Island. I came to believe that the mothers of these women inspired the pageant moms and cheer moms of today with their “take no prisoners” approach to getting what they want for their daughter!

One thought on “Review: The Husband Hunters by Anne De Courcy”