The subtitles says it all for me: A portrait of American food from the lost WPA files. In the Great Depression the Works Progress Administration, a jewel in the crown of FDR’s New Deal, gave work to my paternal great-uncles that involved big, heavy shovels, and gave work to all sorts of other outside the skilled trades. These included artists and writers. The Federal Writer’s Project, best remembered for the outstanding Baedeker-type guides to each of the then 48 states. Among the writers employed by the project were Saul Bellow, Eudora Welty, Richard Wright, and John Cheever among many others. Author Zora Neal Hurston,  in the Florida office, was given only a lowly interviewers position due to the state’s horrific racism and entrenched segregation.

This book, pulled together from the files of the Federal Writer’s Project is drawn from the manuscripts, such as they were, being developed at the time the Project ended for World War II. It is very much a document of it’s time, full of distasteful racial stereotypes in the discussion of Black cooking and Native American diets. The author does an excellent job of explaining why, uncomfortable though it may make the reader (parts were cringe-inducing as an audio), keeping to the original language of the author’s was essential both to see it through their eyes and to show us how hard those times were for various racial or ethnic groups. Remember, lynching was a huge problem in the 1930s. The 1920s featured a huge KKK revival that overtook my own home state, Indiana [I live in Ohio now–not much difference in Southern Ohio]. While FDR is remembered as a liberal, it is worth recalling that he was cowardly or practical (depending on your opinion) in not pushing for the anti-lynching bill needed, but left that to Eleanor and a few trusted assistants. Remember, too, that at the start of Social Security, domestics and  farm workers were excluded–no need to spell out their races, is there? About as Midwestern a meal as you could hope to find. Served on the dishes of my childhood, too! Photo source.

I normally read a few “foodie” books each year. This year I did read the humorously titled How to Cook Your Husband the African Way, otherwise I haven’t read any foodies this year. Reading about the food of each American region back in the time my grandmothers were young wives and mothers really sounded good to me. My Dad often recalled having popcorn with cream and sugar as breakfast cereal. The year he was born his family lived largely on apples and Cream of Wheat–or so he and his aunt both told me. That aunt found work as a “hired girl” on a farm cooking and cleaning alongside the farmer’s wife. That family became her lifelong friends and my Dad’s godparents. Very different from the life of most Black domestics of the era. 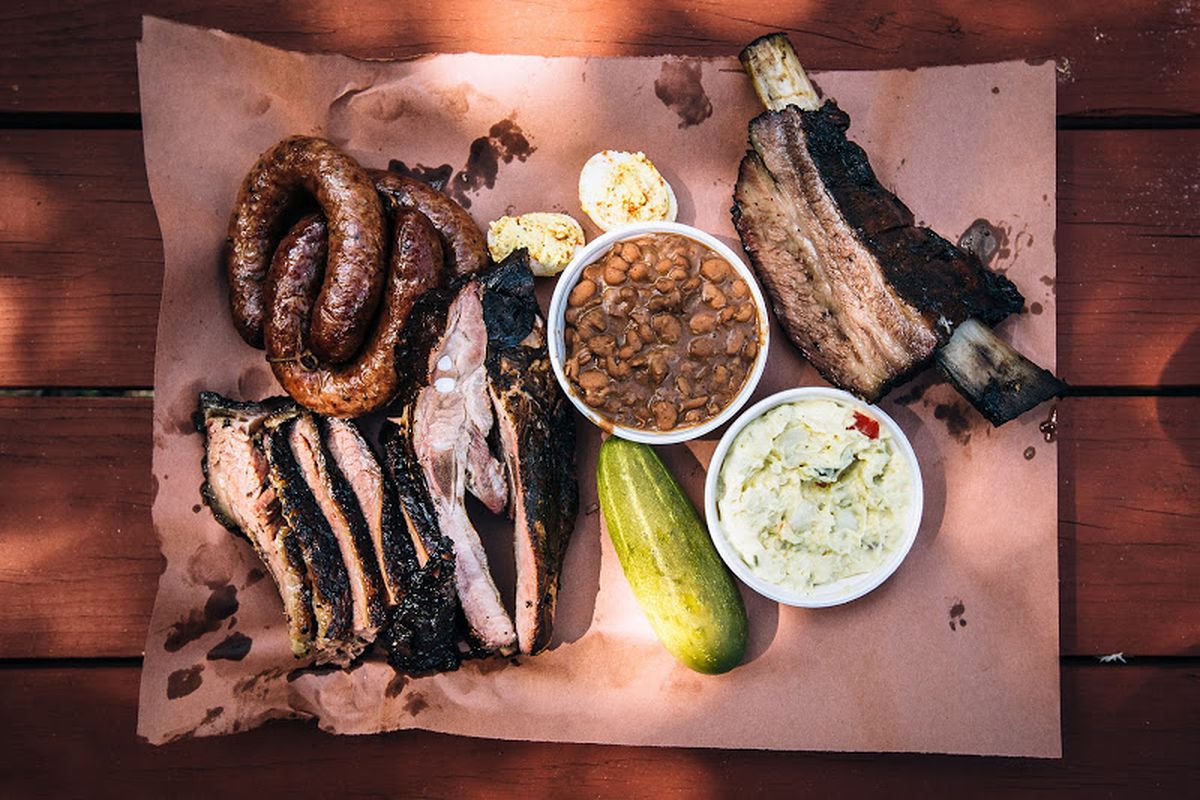 As the book journeys around the country we hear of dishes both familiar and forgotten. I wonder if anyone still makes Brunswick Stew or Burgoo with squirrel? Possum roast, anyone? How about fried beaver tail? No? The best by far was learning of the existence of the Geoduck clam–pronounced “Gooey Duck” which I wouldn’t introduce to a junior high school class for any amount of money. See why here.

The few exotics aside, most of the food is still here today: Fried chicken, hunks of beef or pork, fish and seafood on the coasts, as well as all the different styles of barbecue and and baked beans or clam chowder, corn bread or pancake-style treats. Coleslaw, green beans cooked with ham or bacon, hot salad of “wilted” greens, fish, stews and even health food fads are all still here.  Some even still eat Lutefisk!

Still here are many of the traditional fundraising dinners–the Struts, the fish fries, the sugaring-offs and the others. Who could have guessed back then that the children in Washington state, given homemade hot lunches that sometimes were only hot cocoa, would today get two meals at school and sometimes a package of weekend food? While there is an overwhelming sameness in the chain restaurants of today, chefs have rediscovered regional and seasonal cooking to the benefit of us all. Farmer’s markets and CSA [Consumer Supported Agriculture] produce subscription services help us all to rediscover how to eat where we live.

The two things I found most interesting were the Basque culture in Idaho–the sheep farmers of the region. Mutton and lamb are not big selling meats where I live, except at 4-H lamb auction time. (In fact, the book points out, that they weren’t / aren’t big anywhere except Idaho and New York City). But the Basque’s brought sheep farming to that region and their influence was still there 50 years after the book when I visited that part of Idaho two summers in a row. Like the Portuguese in Connecticut and Rhode Island, the French Quebecois in Maine, this is an unexpected and interesting addition to our melting pot of American culture.

By far my favorite chapter of the book was on New York–specifically on that now-vanished New York institution, the automat. Growing up in “diner-land” in the Midwest, we did not have these. I learned of them in old movies like Cary Grant and Doris Day’s wonderful film, That Touch of Mink (see the bottom of this post).  I dreamed of visiting one for years. Imagine–put in nickles and get a chicken pot pie, move along, put in more nickles, pullout jello!

But for the life of me, I’ve never, ever heard of an Indiana Pork Cake! Wow–that one came right out of midair. Probably the writer heard about it from a neighbor and thought it would be a good human interest story. Imagine baking a cake today with intentionally fatty ground pork? At least they included Hoosier Persimmon Pudding. There is nothing as wonderful in the late fall as a homemade persimmon pudding–especially when the persimmons were grow in your best friend’s parents yard and the recipe is from her sister. Delicious!

Food of a Younger Land by Mark Kurlansky

16 thoughts on “Nonfiction November Review: The Food of a Younger Land by Mark Kurlansky”