It takes a while longer at about 4 pm on a Friday, which is when we took this route from the Rock and Roll Hall of Fame in Cleveland down to our “base camp” for The First Ladies Historical Site, the Ida Saxton McKinnley home, and the William McKinnley monument and library (which also includes the Stark County Historical Society’s excellent small museum). 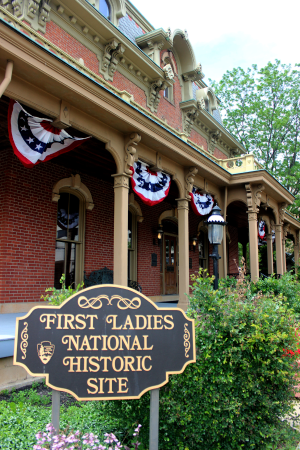 Now, if you tell people you are “getting away” to Canton they’d likely think you were really “off”–as in crazy. But, honestly, the sights we went to see were well worth it. Thursday gets the big draw, but for today, we’re touring the “wives” location as it were. That might give you a hint about Thursday’s venue! 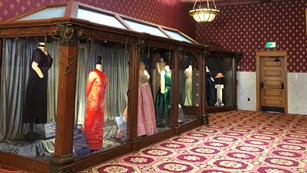 The First Ladies of the United States (FLOTUS) are really interesting bunch! Remember, Harry Truman said “Behind every successful man is a proud wife and a surprised mother-in-law.” Those “proud” wives are the interesting ones, let me tell, you. This was what drew me to Canton, but over all it was the biggest disappointment of the trip. Mind you, we somehow missed part of it. I think that was due to the next tour of the Saxton-McKinley house starting right after we arrived. Judging by the website though, we did not miss very much. We have both read about the First Ladies–some personal favorites of each of us we have read about in great detail.

The newer gowns look like they are the “real thing.” If so, Barbara Bush had a way better figure than we ever gave her credit for! And, Michelle Obama’s gown proves how much t.v. adds to a persons supposed weight. The gowns on display, if they were the real ones, included those two, Jackie, Mamie, Melania, Rosalynn and Nancy–all of whom would have been magnificent in those incredible frocks. Simply gorgeous gowns, regardless of their husband’s party affiliation.

This is a National Park that deserves our donations to make it worthy of the ladies who have endured the teas, put up with no family life, and often made serious, lasting contributions to our nation. Here is the website. Please consider donating.

Here are a few of my favorite First Lady biographies. The first one I wrongly stated in a previous post was out-of-print. It is not, but it is not available for Kindle. It is widely available used and has not been updated. 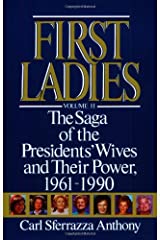 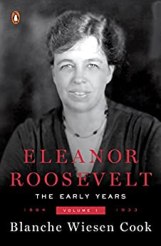 In the drizzle of a that first truly “Autumnal” morning of the year, we walked up the street to the Ida Saxton McKinley house.

Take a virtual tour HERE of the Saxton home.

I’d be lying if I said I was “fascinated” by William McKinley. To him we owe much of hidden Colonial Empire–such as the Philippines. From middle school history class I recall that McKinley was deeply troubled by acquiring the Islands and so prayed to God (Presidents were still allowed to be caught praying in 1974–and certainly back in the 1890s) who then said “Keep Them” and McKinley did. No word on whether God was really God or just the voice of McKinley’s party.

That said, poor Ida McKinley led a less than charmed life. She suffered the death of both her children before they reached age 6. While that was certainly not unusual back then, it still hurt. She also developed seizures and other bad health that led to an “ify” diagnosis of epilepsy and a mandate that she stay out of the excitement of life (a similar prescription was leveled on little Prince John, son of King George V and Queen Mary who left the family to live at Wood Farm on the Sandringham Estate, better known today as Prince Philip’s bolt=hole).

Ida was a busy FLOTUS in one way–she cranked out pair after pair of crocheted slippers to give to charities with a letter. The charity then raised money by auctioning off these very humble items at great profit. Good job, Ida! Her fan collection was very impressive–a few were on display at the home.

What was more amazing to me was the resurrection of the home from urban-blighted mini-mart, flop house, coffee shop and more to such an impressively restored home. The wallpapers were exquisite. In a story worthy of Antiques Roadshow (though I think it was a different show the item ended up on), in the restoration process, one of the ladies spearheading the effort found a light fixture at a Florida flea market that matched the light fixture in a photograph. Since the McKinley’s either thought of history or were garden-variety, Middle Western pack-rats, a purchase receipt was located that had the exact serial number for the light fixture. You guessed it, it matched the flea market find! That’s the kind of restoration this is. Beautiful.

I can’t say I have a favorite McKinley book, but the poor man was assassinated and we’ve largely forgotten him because his Vice President was the ever-larger-than-life Teddy Roosevelt. Here is a link to his White House biographical sketch.What I know of Ida comes from the First Ladies book above. In writing this post, I discovered that author had written a stand-alone biography of, who else? Ida Saxton McKinley–she whose health improved when she left the White House and moved home to Canton. Go figure.

Next we drove a few miles down the road to see where the McKinley’s are buried. The McKinley Monument is in McKinley Park. Popes and Kings have been buried far less grandly (consider poor George VI, whose coffin resided in a back hallway of the Royal Mausoleum until the burial of Princess Margaret’s ashes!). Forget the old joke about when is buried in Grant’s tomb–just look at this monument! I should have taken the photo as we drove up–it is even more impressive from that view. 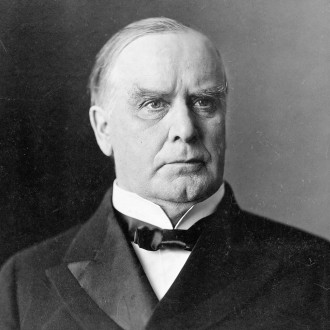 The tern for this little museum is “hidden gem.” This was a fascinating local museum! It was the unexpected treat of our trip. When I posted about it on Facebook, another friend said she and her husband had found it to be that as well. Most counties have somewhere for school field trips on local history, but this is beyond that. There were a few unique items not found in much bigger, supposedly world-class museums.

The McKinley side of things was somewhat lacking–a cheesy automated “doll” type vignette for school children–the one disappointment in the place. In spite of that, there were these beautiful gowns and a lovely glove box all of which belonged to Ida.

Other displays included a history of telephones, an twirling amusement park ride, local history exhibits, and an impressive full-room model railroad setup of local places. There is a special prehistoric exhibit, too, and a planetarium. These were aimed at families and neither of us had interest in visiting them. Here is the museum website. I must add that I would give a huge donation to forever silence the “laughing lady” exhibit. Obnoxious. I’m sure though that school groups love it.

Tomorrow we visit “the big draw” –the place that puts Canton on the map!