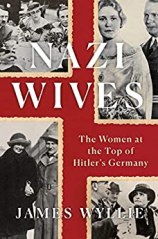 I am an avid reader on all things World War II. Hitler aside, I’ve focused my reading on the victims more than on the perpetrators. About all I knew of the wives was that Magda and Joseph Goering felt a world without Hitler was no place for them, their children, or even their dog. All were killed or committed suicide at the end with Hitler. I also knew just a bit about Mrs. Adolph Hitler–Eva Braun who “enjoyed” her status as wife only in death. So, this book caught my attention. It might seem an odd choice for a fun road trip book, but I listened to it on my recent trip. So, technically, this is a book I read BEFORE November. With the first week of Nonfiction November looming, and the “What I Read This Year” topic starting us off, I saved this review for the starting week.

Gerda Borman, Magda Goebbels, both Mrs Goerings–Carin and Emmy, Ilse Hess, Lina Heyrdich, and Margaret Himmler have helped earn this book the flippant subtitle “Real Housewives of the Third Reich.” The author, though, is right–there is a gap in knowledge about these women. Partly it is the time they lived in. Most women lost their identity in those years and became “Mrs. His Name.” Then there is the reason their husbands are so well known. When you are married to men who brought about the “Final Solution,” that is the Holocaust, it is hard to know how to process the idea that women like these loved their husbands “in spite of” killing millions.

Told in an often annoying back-and-forth both in time and in woman’s life manner, I found I was often a little confused over who and what was going on. In spite of this I did manage to learn some interesting tidbits about the women and their men that I had not known before. Who knew, for example, that herbal remedies and alternative medicine was in some ways part of the Nazi movement? I did not. I knew of the mythology and the taking over of religion to form a “secular-nazism” with its own quasi-religious rituals and all, but I had no idea who believed it and who stayed in the co-opted churches.

Emmy and Magda and Eva Braun are likely the best known of this group. As in army units, law firms, or even factory floors, there are friend groups among the workers that include the spouses. They meet for big events or for small parties in one home or the other. There are also rivalries, jealousies, and dislike among the spouses for each other. This was true in the upper echelons of the Third Reich as well. There were the beloved spouses, the horrible, mean, unfaithful spouses, and those in between. There was the couple who struggled to have children and the couple who popped them out effortlessly. There were even the wives who were utterly devoted to the Boss almost to the exclusion of their own husbands.

I have read a few very negative reviews of this book online. I am not so well-versed in the subject that I spotted more than a couple of very minor errors, but I’m certain the people whose published reviews point to more errors have done their homework.

Mostly I was very interested in these women and their marriages. I was surprised by how well-educated most of the women were. I was not the least surprised though when a few fought for and won, state widow’s pensions after de-Nazification. The lives of these women came to be defined by excess–money, power, treachery. Their own treachery in abusing their power over Jewish inmates doing work for them and their husband’s treachery to the world. One or two tried a little to limit the damage done, but mostly they obeyed and kept the opinions with which their husbands supplied them. I’m not sure any of these women deserve more notoriety.

3 thoughts on “Nonfiction November Review: Nazi Wives: The Women at the Top of Hitler’s Germany by James Wyllie”