My Review from July 2015: I’ve always been drawn to the stories of the World War II “war brides.” [Well], I devoured Ship of Brides by JoJo Moyers—a novel she wrote before Me Before You fame hit. The layers of this story were amazing. Not just the tale of how each bride came to be on the ship, but much more than that—how she became who she “is” on that ship. The story is there too of the ship’s Captain, of a Marine and of others.

Since July 2015, I keep coming back to the main characters and wishing the author would write a sequel telling of their lives adjusting back home in peacetime, but even stricter rationing and all. I’d love to think the Captain finds romance. I wonder if the Marine had PTSD? How did the a few new characters–wives we didn’t hear about i the first book get on after arriving in the UK? There’s a story here waiting to be told! Ship of Brides by JoJo Moyes is currently $1.99 for Kindle. 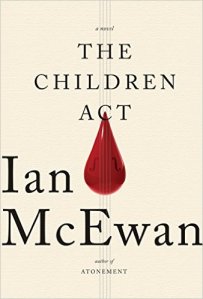 High Court Judge Fiona Maye deserves her own series. I loved her. Nothing quirky or silly, just a solid legal mind and compelling personal life as a well-heeled, well-educated woman in a great city. Midsommer Murders meets Rumpole of the Bailey  meets Silk, but with Kirsten Scott Thomas as be-wigged and be-gowned Fiona and Jeremy Irons as her rat baggish-midlife crisis-suffering husband–lots of potential here. And women of a certain age want to see women of a certain age still strong, still in their careers, still being taken seriously and still doing serious stuff. And they like to listen to Jeremy Irons voice….. And, if they even got shown tumbling into bed in a moment of unintended reunion–well! Score one for those of us of a certain age! Still sexy is a big deal. Plus she’d get to dress great, lunch at the House of Commons, holiday in Tuscany and cool stuff like that to add interest.Are you listening @ITV or @BBC?  The Children Act by Ian McEwan.

Do you have a favorite book you’d like to see earn a sequel–or become a series either of books or on tv? Leave me a comment or link to your own post.

Short stories are not my favorite way to read. Oh, not because they aren’t enjoyable–they are. And, yes, published ones are very well written. It’s just the short part. I’m left wanting more. This is the case with Jessica Brockmole’s short story Something Worth Landing For in the new collection of World War I themed short stories, Fall of Poppies.

Wesley and Victoire strike a bargain–a bargain that belies the little confidence Wes thinks his mother has in him. The story planted such sturdy seeds in the fertile ground of my imagination that I want to see the grown plants. I want the rest of their story!!

If you follow me on Twitter, you’ll know already that I suggested a sequel in a tweet. I’m sure the author has writing projects planned till the end of her life like I do, but maybe, just maybe, if a few more of you read the story and agree (and let her know!) then I’ll get my sequel. Please, please read it–and, while you’re add it, read the other short stories in this collection.

By the way, Jessica Brockmole’s new book, At the Edge of Summer, comes out next week, but is available for pre-order here on Amazon.

Sequel Please!  is an occasional series on this blog. Here’s the first installment of the series.

So often I finish a novel and wish there was a sequel. So, I thought I’d begin highlighting those books in an effort to get the author to…well…write one!

I read very little Christian fiction, but one author in that genre that I really enjoy is Lynn Austin. And the second book of her Refiner’s Fire series, Fire By Night, left me begging for more. Julia’s change from spoiled society girl to useful, empowered woman alone was enough to make me want a sequel. But throw in James–a brooding doctor and surround them with the Civil War?? SEQUEL! SEQUEL! SEQUEL!!!!!

Do they live happily ever after. Do they experience 19th Century PTSD? WHAT HAPPENS NEXT?

I just plain LOVED them. This book is excellent. I want more!

Fire By Night by Lynn Austin.