Cary Grant always portrayed the smooth, handsome charmer, often as the older man wooing a beautiful younger woman. Finally he must have liked the role so much that he fell for a much younger woman and married her–before it became a Hollywood cliche to take a trophy wife.

Diane/Dyan Cannon [her name was changed accidentally and she kept it] was a 20-something acting in a TV show when Cary Grant spotted her. He patiently worked to get her to go out with him, then set about “wooing” her as one of the characters he’d played would have done. Almost 60 then, with a dignified touch of silver at his temples, Cary Grant was just beginning to think he was too old to play opposite younger women. He feared that the public might find it, in today’s term, a bit “pervy.” But dating? That was another matter. He didn’t bat an eye at Dyan bring a girl friend along, didn’t press in an ungentlemanly way for you-know-what. He was classy. He played by the old-fashioned rules until Dyan was well ready for more. He won–Dyan fell in love with him, hook, line and sinker. She even went to the altar expecting his first and only child.

But marriage changes things for some people. Cary had a scarred emotional past–a mother locked away as insane whom he was told had died; a father who was  distant; three previous wives. Dyan thought the romance was set to continue. She’d live happily ever after with the world’s Prince Charming. But this was the 60s. Cary had discovered LSD and thought it a profoundly life enhancing drug. He demanded that Dyan try it. Her maiden voyage–her first LSD trip–should have been her last and she knew it. That “trip,” in which she willed herself to ignore all sorts of warning signals, was the beginning of the end.

Happily the couple had a daughter, Jennifer. For Cary, becoming a Dad for the first time after age 60 was a welcome shock. But a bit of paranoia kicked in. Dyan came home with the baby to discover her beloved dog had been given away and that Cary had given his dog away as well. He never told her where they were sent. And then there was the criticism of Dyan over just about everything. Nothing worked anymore. Cary even said Dyan needed a breakdown–it might “help.”

This week, Cary Grant Week, and last week’s Valentine’s posts have been about fantasy. As children we learn to distinguish real from fictional, reality from fantasy. Sadly, for many young women this happens with men very late in the game–usually too late in the game. Dyan Cannon was one such girl.

I didn’t come away from this book feeling sorry for Dyan though–I’ve walked in her shoes. Oh, not with a Cary Grant, but close enough. I just thought she should have answered that clue phone that was ringing off the hook when Cary wouldn’t pin down their relationship in any stated terms. Or when he insisted she take a second, obviously unsafe and totally unwanted LSD trip. But, like so many of us, she pretended she couldn’t her the phone because, well, CARY GRANT!!

As for Cary, I felt only pity. Pity because he seems to have come to believe the movie magazine stories about himself. He seemed, like an alcoholic, to believe he could control LSD and “quit any time” if you will.  He clearly saw that he was too old to be the leading man in movies, and rightly perceived the public’s reaction to him in such roles, but he went out and chased the skirt of a very young and naive woman. 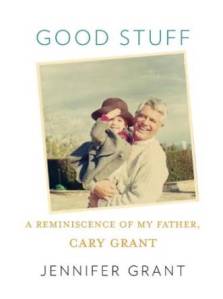 I was glad, though, that Dyan wrote that he loved his daughter and cared for her. I see that Jennifer wrote her own book, but I have not read it.

Interestingly, Cary married for a fifth time, to a British woman, Barbara Harris, 47 years his junior. She would become his widow.

Dear Cary–a sad and predictable tale of vanity, awe and disillusion. Or what happens when we make men Gods.