I learned of this book via The Cozy Burrow.

I received an advance copy of this book from Net Gallery. The opinions expressed here are mine. I was not paid for this, or any, review.

World War II, as I’ve soft quiet often recently, is a huge interest of mine. The period immediately after the war through the end of the Berlin Airlift does not receive as much attention. This book caught my eye since it begins in soon after the war. I am also participating in the Historical Fiction Challenge this year at the blog Passages to the Past.

Say the name “Falkenberg” in Essen during the War and it would be like saying “Carnegie” in Pittsburgh at the turn of the century. Like their cross-town rival, Krupp, the fabled German Arms producer, the Falkenberg ironworks produced for the Reich. Headed by Theodore, the wealth of the Falkenbergs protected Theodore’s English wife, Anne, and their children–the sons all in uniform,  leaving daughter Clara as her father’s war-necessitated understudy.  Clara, who came to be known as the “Iron Fraulein,” the Reich’s most eligible heiress.

The war is over now, and the British occupy Essen Captain Thomas Fenshaw has studied Clara since she attended a British Union of Fascists rally with her mother in England in the late 1930s. Unlike her father, who is in custody, Clara remains free. Fenshaw is determined to find her.

Clara puts herself at risk trying to find her dearest friend, Elissa and Elissa’s son, Willy. In the after-war chaos of stateless persons, homeless Germans, and occupying armies, this is a risky proposition. 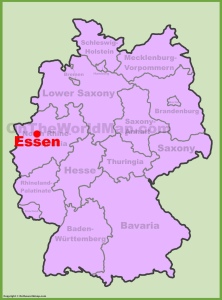 Forgive me if I spent part of the book giggling “Iron Mädchen” thinking of “Iron Maiden”. Ok, that was silly. Clara’s story reads like a thriller. There are turns and twists, secrets and lies–all the aspects of a well-told, suspense-filled thriller, with just enough romance thrown in to make it that much more interesting.

I felt that while the suspense could have been heightened more for my taste, and that Clara was a bit too 007 once in a while, overall this book exceeded my expectations. One secret I never anticipated! My one moment of disappointment was “the pet.” I won’t explain this as it would be a huge spoiler, but “the pet” was my one big “oh, come on!” moment in an otherwise great read.

The German Heiress by Anika Scott is available for pre-order, publishing on April 7.

If You Enjoyed The German Heiress, Check Out These Books:

The Women in the Castle: A Novel by Jessica Shattuck

A Castle in Wartime by Catherine Bailey

A World Elsewhere by Sigrid MacRae, link is to Amazon (I do not make any money if you click)

I reviewed this one on my old blog.

6 thoughts on “Review: The German Heiress by Anika Scott”