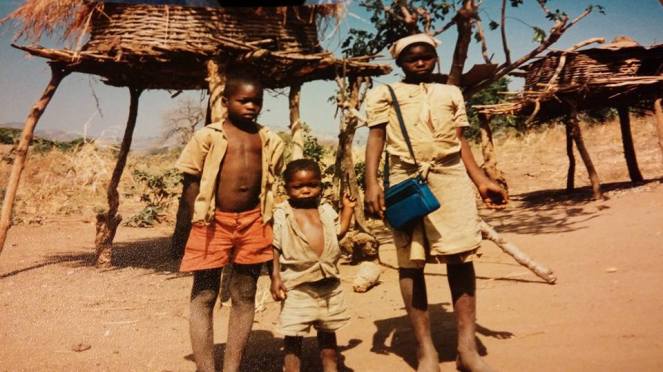 These children are very real to me–it is my old camera that took this photo–I gave it to their uncle. They were all three alive when I left Malawi in 1991. I would imagine all are dead today. Life expectancy is very poor in Malawi and they are from one of the poorest regions of that country. Today there is famine in their home area. This photo was taken the day their mother was buried and sent to me. They took the dress off the mother’s corpse, washed it and the next day the girl above began wearing it. That is poverty. The little boy died a year later for lack of Tylenol for his fever, lack of nutritious food, lack of a mosquito net or chemical mosquito coil to burn and lack of….well…HOPE. 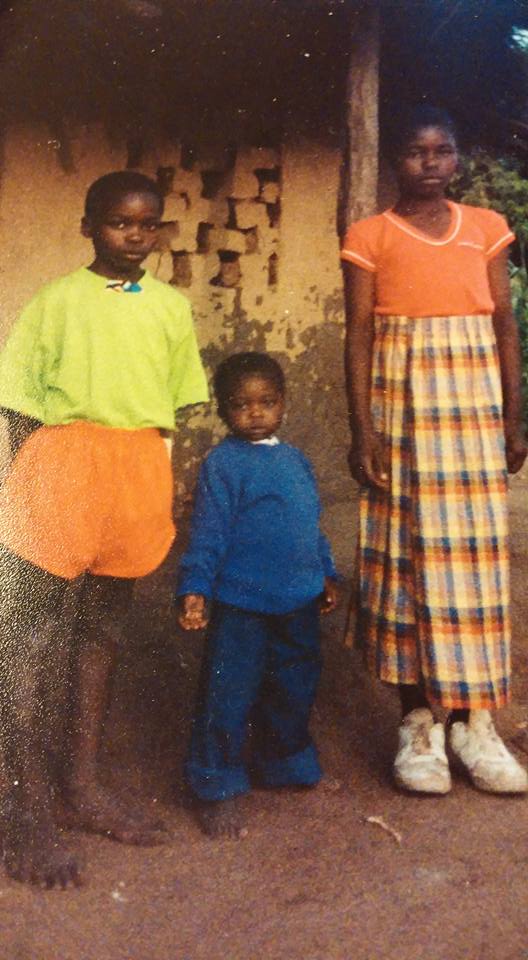 Even if you stop reading here–you’ll understand more about why I do this and about world poverty.

It is the lack of HOPE that Operation Christmas Child so successfully treats.

A few months later, the Uncle who took the first photo, sent this one. The girl is now wearing the shoes I left behind as I went home to the States after Peace Corps.  The clothes they are wearing cost way more to mail than to buy on Clearance for a dollar each at the Family Dollar Store. But they are changed in this photo. All three are now looking at the camera. A photo was a serious thing at that time in Malawi, so broad grins were not the norm.

These three children, whose names I won’t share, are the reason I do Operation Christmas Child shoe boxes When I sent and brought gifts (I made two return trips to Malawi) for these children and many others, their Uncle (who supported 40+ dependents) could pay their school fees, give their grandmother a little money for medicine and extra food, for soap and for additional garden seeds to supplement those she saved each year. 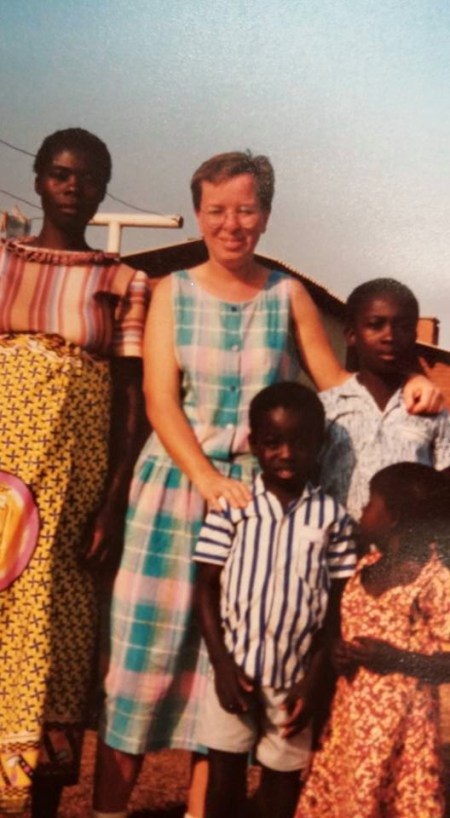 I also think of this brave lady and her children–again, they are most likely all dead by now. She bravely asked me for a loan to plant a bigger garden. With the pennies I gave her for more seeds, another garden-hoe and some bus fare to take the first vegetables to a big market, she was able to buy her sons ready-made clothing and not just fabric to give a cheap tailor. (Her daughter’s new dress is fashionable, but made from my old curtains that I couldn’t use in that house). You can see that the little boy’s tummy is still distended from malnutrition. She was able to feed them very well–knowing that each day there was food they must eat and eat to survive the “hunger” when the crops aren’t in and the food is running low. She was able to not only pay the school fees, but she was able to afford the paperback text books for the two boys–and could then save them for her girl. They children also got pencils, chalk for the teacher and plenty of exercise books. All because their mother was brave. She paid back the loan, too. No man who ever asked for a loan every paid it back! Sadly, a year later, the baby she is carrying in the photo died during a period of famine. 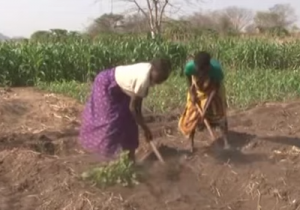 I think of the children in the very poor villages of Malawi–not the children of the Malawian Civil Servants with whom I worked each day. Those were the children of “been-to’s”; their parents (sometimes both) had been to the US or the UK or somewhere else for a college degree–maybe even two degress. Those children were middle class. Their village relations were an embarrassment and a serious drain on the family checkbook. 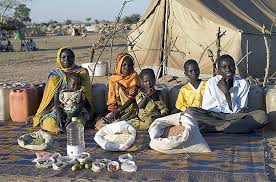 This photo is from Mali, not Malawi, but the food presented is typical of most of Africa–a starch as primary food, beans as the main protein, salt and sugar, cooking oil. The main dish in Malawi IS nutritious–tomato, onion, and _______ (either greens or okra in the tomato mixture or hard-boiled eggs, fish or beans or meat if/when such luxuries are available.) When eaten with whole meal corn porridge it is very adequate.  Washing hands in a common bowl, sharing spoons or cups, also contribute to ill-health. If one person has T.B. or other illness, all soon have it. Then there’s the problem, still, of clean water. 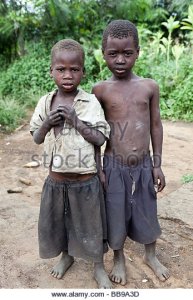 I think mostly, though, of the children who were just somehow fed and brought up in that fabled village of Mrs. Clinton’s. Children who hovered on the sidelines–watching, always watching. Without parents or other relatives they were just “alive.” They are in every village–in some the school may look the other way and let them sit outside and learn. Usually some Grandmotherly woman sees they are fed a little. Such children are just like in this quote:

“[He] would come with me, but would not join the children on the school-benches, he would stand a little away from them, as if consciously closing his ears to learning, and exulting in the simplicity of those who consented to be taken in, and to listen.” 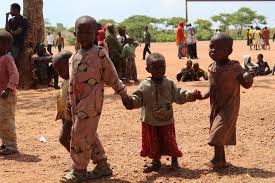 Child wearing a blanket sleeper–obviously donated–as his only clothing. Source

At Target I found “pet” blankets for $3–none with an obvious dog or cat print. All soft and warm–unlike the harsh local blankets. At Gabriel Brothers I found, admittedly thin, fleece blankets for $2 and bought all that were left. I’m a pro at packing these things.  No  one who is forced to co-sleep finds it romantic like so many middle class Americans do right now. Instead, those forced to co-sleep dream of a blanket for each child so each may be warm and sleep well. In Africa children usually sleep in their same clothes or naked so the clothes can be washed and hung to dry overnight. It gets down to the 40s at night in Southern Africa. That’s pretty damned cold. Pajamas are unknown and would simply be worn as daytime clothing. Blankets are prized.

Poverty looks very different in other countries. In Malawi, Zambia, Zimbabwe, Mosambique poverty means malaria, cholera, t.b., and infected burns that kill toddlers who stumble into cooking fires or grab a pretty flame. It means being so hungry, at least part of the year, that you have no energy. It means what is called “protein-energy” malnutrition–a fully tummy, but full of nothing the body can use. Food Security–a year-round source of nutritious food, is a dream. Charities like Save the Children and government agencies like USAID try to help. When Princess Anne came to my research station in 1991, she was bringing attention to food security and Save the Children. 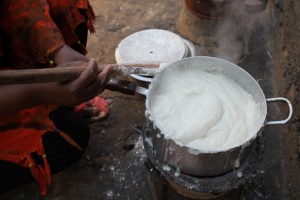 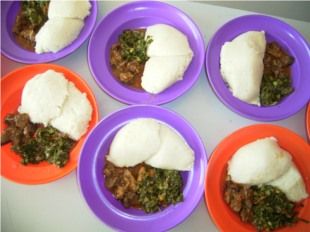 Nsima with Ndiwo–“relish” or vegetables and beans. Served on impossible to de-grease cheap plastic plates.  Source

Local practices, too, can hurt children, too. Many in Malawi mill their corn meal till there is almost no nutrition because white soft, white “Wonder Bread” cornmeal is seen as best. Those who eat the whole meal corn meal are much bigger and stronger. Protein sources are hard to come by. This is largely a legacy of the British–Malawi was the garden when it was Nyassaland. The veggies, rice, and fish came from here–the meat from what is now Zambia and Zimbabwe. Independence, too, played a role. Kamuzu Banda, the nation’s long-time dictator, was a classic totalitarian despot. He made maize [corn] a God and made it the country’s primary food crop–even in areas where rice or sorghum or millet were the traditional grains and were best suited to the region’s climate. These played a huge role in malnutrition for years. Today’s Peace Corps volunteers teach above improved farming and better nutrition.  In many areas REFUGEES eat better than the local population. Here is a link to report on what refugees are given by the UNWFP.

This quote sums up WHY I do this:

“My existence was not random, nor was it an accident.”

And of course this verse:

Fascinating article on this verse here.

IT’S THE RIGHT THING TO DO FOR NO OTHER REASON

Are you packing a shoebox? Join us on this blog for the Virtual Packing Party on November 12, 2016. Post a link or send an email with photos of your boxes. I’ll be happy to post your photos and give credit. 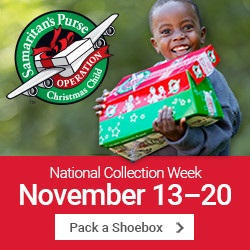 4 thoughts on “The children I think of when I pack O.C.C. Christmas Shoeboxes, part I”